Who is Ono Ozaki?

Ono Ozaki is a fictional eco-warrior and creator of The Ozaki 8. We’re told in Point Break that he created these eight tributes to Nature as a challenge to the extreme sports and eco-community.

We know very little about Ono Ozaki and indeed, just catch a brief glimpse of him in an image near the start of the film, in which Utah briefs Pappas about The Ozaki 8 and his theory that Bodhi was trying to pull them off.

While you might be disappointed there never was an Ono Ozaki who gave extreme athletes this kamikaze mission of impossible feats, you can take some solace in knowing who (presumably) gave birth to him.

Just as interesting, there may be legs to the concept of The Ozaki 8 and the movement he championed. As one of my readers points out, a recent study explores the connection between nature and extreme athletes – before the movie came out – and found extreme sports really does inspire this urge to protect the natural world.

Ono Ozaki: Origins of An Eco-Warrior

What little we know about Ono Ozaki amounts to this: he was an eco-warrior, of Japanese descent, and died on a boat trying to stop a whaling ship. 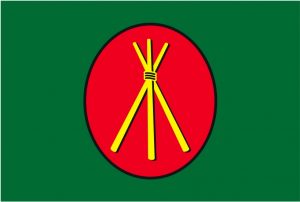 The eco-warrior flag came from Australia in the mid-1990s.

He had another ‘ecowarrior’ on that boat with him – the only one to survive the crash – and you don’t have to be a rocket scientist to guess his identity.

It’s speculation to say who inspired this mystical character. What we do know is that the mythos of the ‘extreme sports/eco-warrior’ is not so far-fetched. Consider a 2009 study, Extreme Sports as a Precursor to Environmental Sustainability, published in the Journal of Sport Tourism 14(2-3), which followed 15 extreme athletes over time.

The study found these athletes truly did develop an attachment to nature – and the innate desire to fight for it as championed in Point Break by some dude named Bodhi.

Thanks for bringing this to our attention, Jonathan!

A Call to Action

Ono Ozaki died in a collision with a whaling boat. I can’t help but think he was inspired by Paul Watson – arguably the most famous eco-warrior on the planet. His organization, the Sea Shepherd Conservation Society, take a more ‘direct action’ approach to marine conservation that Greenpeace, where Watson started.

Indeed, watch Sea Shepherd at work and you could say it takes almost militaristic actions in stewarding the oceans – something of which Bodhi and Ono Ozaki would certainly approve.

Les Dégonflés – A French vigilante group that deflates tires of SUVs in Paris. This, to protest  high vehicle emissions, and the damage they do to our environment.

Penti Baihua – A native Amerindian group in the Amazon region, the Penti Baihua are committed to ending illegal logging in Ecuador and the surrounding area. They’re also keen advocates of ecotourism to raise awareness of and to protect local diversity.

José Bové – French activist and cheese farmer José Bové made news during the Battle of Seattle, in which he famously hurled a brick through a McDonald’s window. He’s taken to fighting globalization in recent years, and has played a prominent role in French politics.

WWF – The World Wild Fund for Nature is an international NGO committed to preservation of the planet’s fauna and our footprint on the environment. They’re less militaristic than the ecowarriors we’ve talked about here, in favour of a diplomatic approach to conservation and stewardship.

Did these eco-warriors influence the character we know as Ono Ozaki? I’d say they did, especially Watson. Watch this documentary about him and decide for yourself…