What is Halloween Horror Nights?

Halloween Horror Nights are a yearly tradition come the darkness of October at Universal Studios in Hollywood, Orlando, Singapore and Japan. It’s a horror-themed age 13+ event that began in 1991 at the Hollywood location and consists of rides, mazes, creeps and scares for folks who want a little spook in their season.

It’s not that scary Halloween maze you did as a child. Halloween Horror Nights is a major production that makes clever use of your favorite slasher/monster from the 1980s. Think Jason, Freddy and Leatherface, along with recent contributions to the horror genre, like The Walking Dead, and, in Hollywood, a macabre walk through that thing called The Purge.

Like Roger Ebert once said, perhaps there’s a little ghoul in all of us, and Halloween Horror Nights has been a roaring success at Universal Studios, and with demand for tickets to go with it. So what can you expect if you plop down a minimum $80 for Halloween Horror Nights? Jolts, creeps, and a walk on the chilling side,

Even scarier, waits up to 2 hours – depending on the ticket you buy,

Halloween Horror Nights Keep it All in the Family 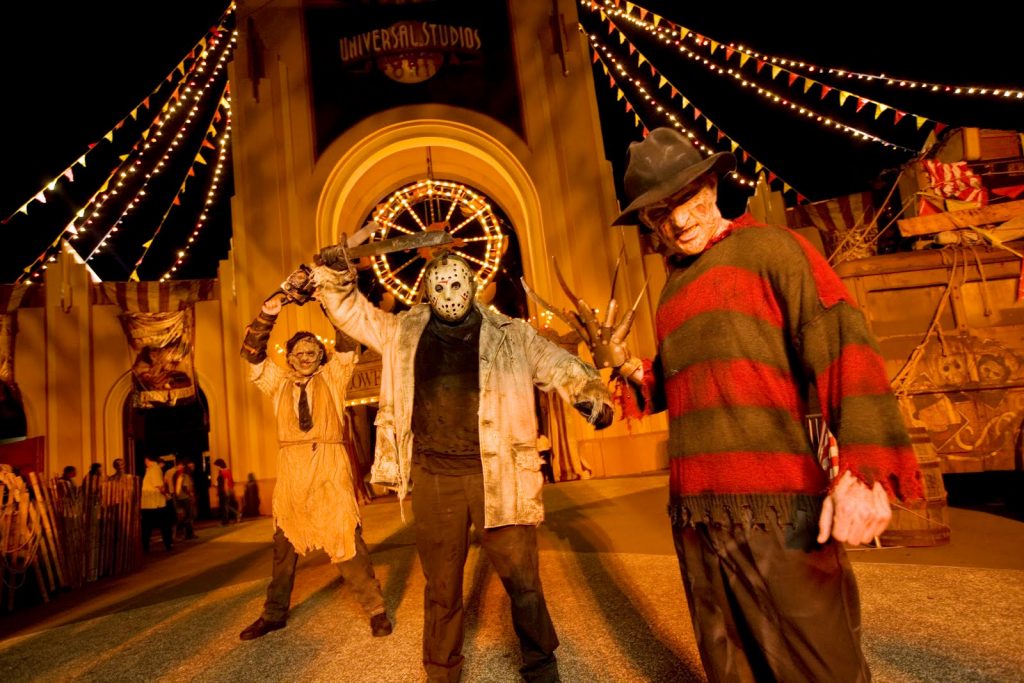 Freddy Vs Jason is a Horror Nights favorite.

Starting in 2007, Universal bought the rights to use some of the biggest names in the horror genre. They’ve added to that list yearly. While the attractions are unique to each park, today Halloween Horror Nights boasts Freddy, Jason,  Eli Roth, The Purge, American Horror Story, The Exorcist, and, yes, perhaps the odd evil clown or two.

Universal Horror Nights is basically a theme park designed for Halloween, with rides, mazes, scare zones and a ‘terror tram’ to put the heebie jeebies in you. You’ll be chased by live actors with chainsaws and see a little gore – though it’s more of a fun scare and not one of the truly ‘extreme haunts’ that have ruffled feathers in theme park community.

It’s in the realm of a zombie cruise, which said might be a good bucket list experience for folks who with a little creep in their stride during these dark, longer nights that lead up to Halloween.

HHN Tickets, Hours and All That Fun Stuff

Halloween Horror Nights run from mid-September until October 31 or slightly after. At Hollywood, it’s Thursday to Sunday from 7PM until 2AM. Horror Nights at Orlando and in Asia have different hours. 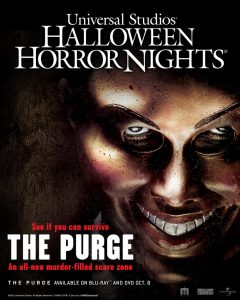 The Purge is a new addition to Universal Studios Horror Nights.

With the event being so popular, Universal Horror Nights are now sold with optional hotel packages to encourage visitors beyond California and Orlando. Tickets start at about $56 USD per adult and can approach the $300 mark with extras like the ‘Express Pass’ that let you skip those dreaded lines, or a ‘Frequent Fear Pass’ which gets you in on multiple nights.

It’s probably a good idea to fork out a little more for the Express Pass because you’ll have company on Halloween Horror Nights, at any park, and the true horror might be how long you’ll queue with just a regular ticket.

Arrive early, and budget more, to maximize your fun at this twisted event.

Let me know if you do this – I’d love to hear about your experience at Halloween Horror Nights! And if you’re reading this, Mom, don’t watch this video. Enjoy!