The snow leopard is a mystical beast. Rarely seen, it lives in the mountains of Central and South Asia, in higher elevations, where it lives up to its name and rules its snowy kingdom like the apex predator nature designed it to be.

They’re rare – that’s an understatement. Estimates suggest the snow leopard is down to just 6,000 of the animals left in on the planet – and that number appears to be dropping quickly.

So you can imagine that it was pretty epic when a group of skiers shredding down the slopes of a ski resort in Kashmir (India) came upon an unusual sight: a snow leopard, in the flesh, hunkered down in the snow and providing fodder for the stunned folks, who quickly whipped out their smart phones to capture the moment, before it jumps up and briefly chases the group down the slope.

The encounter took place last month as a group led by ski guide Dave Marchi, who noticed something uncovered by snow as he whizzed past and told the group to stop skiing. 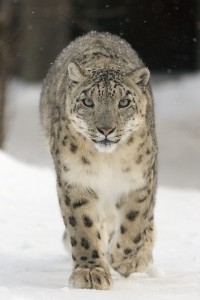 They all stopped, and Australian skier Owen Lansbury whipped out his smart phone to capture the intriguing moment. There’s some strong language here, so cover your ears if you’re not into that, though I can’t say that I blame the dude – he’s pretty surprised by the creature, which is burrowed in the snow for a minute or so, and then lets out a growl and (briefly) chases Marchi down the hill. Well, more like runs past him.

Is it Really a Snow Leopard?

Some folks in the area are skeptical this is a snow leopard. After all, such a rare creature, usually at higher elevations on a ski slope? If it were true, say authorities, we’d probably see more sightings of the creature in this area – and gaggles of visitors close behind it.

It’s possible, they say, that it’s just a leopard (just!), which have been seen more frequently in these parts. I think that’s odd, personally, because leopards are desert creatures, yes? And you wouldn’t expect to see one buried in snow, though I’m not a biologist and could be wrong on that.

Still, it’s an amazing moment, between man and beast, in an unlikely situation. If it is a snow leopard – and I think it is – it makes this video all the more thrilling.

Leopard in the snow in Gulmarg, Kashmir from PreviousNext on Vimeo.