When someone says they have a bridge to sell you, it’s a sign of contempt. But when someone offers to sell you a ski resort, say, Red Mountain Resort, near Rossland BC, it looks to be the real deal.

Want to buy a ski resort?

I don’t have one to sell you. But Red Mountain Ski Resort CEO Howard Katkov does – and he’s floating the idea of raising money for the small but popular Canadian ski hill through crowd sourcing. You can invest between $1,000 and $25,000, he says, with equity in the resort as it looks to raise money.

A Slice of the Pie…

You’re not going to get rich by doing this. Katkov says flat-out that he will maintain a controlling interest. There are no voting rights, nor dividend payments to be had. 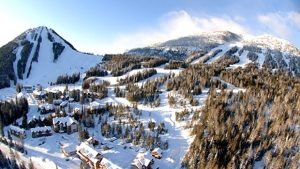 But, in the words of Gordon Gekko, “You get perks. Lots and lots of perks.” In this case those sweet little bones Red Mountain will throw you include anything from lift tickets to membership and a clubhouse.

In other words, it’s a chance to party your face off. It’s not a time share – you’ll presumably have your way on the hill for the duration of each season, depending on your investment. You’d also be issued a share certificate, which documents your stake in the hill, including undeveloped land, chair lifts, lodges, and everything else that makes Red Mountain the talk of Rossland BC.

Red Mountain Resort is in the South Kootenays, in southwestern British Columbia (Canada). It’s about three and a half hours from Kelowna, near the American border (it’s closer to Spokane, Washington than Vancouver or Calgary).

Red Mountain is one of the oldest ski resorts in North America and has runs from beginning to expert level, spread across three summits, with five lifts on 110 named runs.

I’ve never been there but it frequently pops up in ski chat – it’s rated highly in TripAdvisor for its relaxed vibe, and the value it gives for extreme junkies of the winter sport variety.

My thought? I think it’s interesting. You’ll make more money by investing in extreme sports companies on the stock market. This is fun investing – with perks – and may be worth a second look if you feel incomplete without a little hedonism when the mercury goes south.

Here’s a little slice of what you’d be buying. Visit StartEngine to learn more.