Watch This Snorkeler Get Scoped By a Great White Shark

If you’re a snorkeler, and have an aversion to great white sharks, may I suggest you skip Lucky Bay in western Australia?

Then again, if you’re a shark fanatic, like aspiring film-maker/snorkeler Ash Gibb, Lucky Bay truly lives up to its name. For proof of that, I give you a video of a rather unique encounter filmed two months ago, in which Gibb gets scoped and checked out by a very curious adolescent great white shark.

The encounter took place in December. 29 year-old Gibb had heard there was a great white shark in the area and wanted to see it himself.

Great white shark diving was on his bucket list, said Gibb. And what transpired next was, well, watch the video and prepare to be stoked.

A Snorkeler Gets Lucky

The video shows a female juvenile great white shark circling Gibb. She’s not aggressive – notice her pectoral fins remain flat throughout the encounter – but she’s extremely curious, and even rammed Gibb from behind to say hello.

I don’t recall ever seeing a great white shark get this close to a diver, in fact – snorkeler or otherwise. 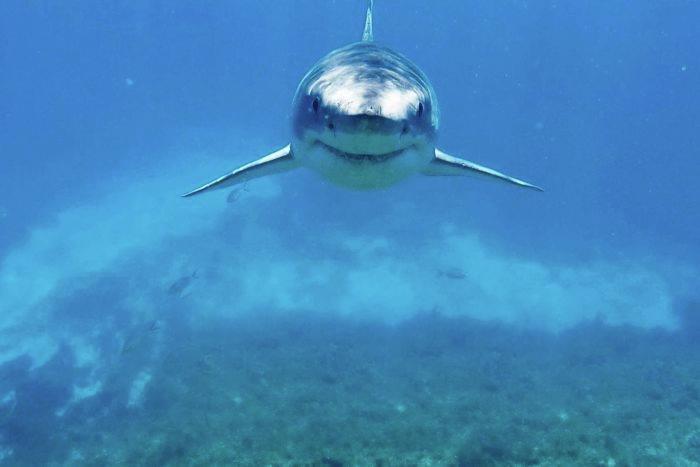 The video is also notable for being in shallow water. To my recollection, I’ve never seen a snorkeler film a great white encounter. We’ve seen a diver jump in the water to film a great white shark off Florida – but that was much deeper.

I truly enjoyed watching this video, of man and shark – and a bonding experience Ash Gibb won’t forget any time soon.

This video may also remind you of another intense meeting with a great white shark in Australia. Three years ago, Aussie cliff jumper Terry Tufferson had a good jolt after jumping into Sydney Harbour with a GoPro strapped on for an afternoon of fun.

Then, on landing in the water, he was startled by a curious great white shark.

Moral of the story? Have an open mind and big set of cojones if you’re a snorkeler or cliff jumper in the glory of Down Under. And if Mr. Whitey shows up, stop and take a moment. Savour the moment – then check your shorts.

I hope you enjoy this video as much as I did.