Big Mountain skier Owen Leeper lives up to his name in the most sickest of places.

If you’ve heard of Owen Leeper, you may know he’s an American big mountain skier with a thing for Jackson Hole Mountain. And if you’ve read my recent post about Life of Ice, you’d know it’s home to Corbet’s Couloir – home of arguably the sickest and most dangerous ski slope in the United States.

You’re about to see someone own it. Like, really f***ing tear it up, including a front flip of an 85 foot cliff, known in skiing circles affectionally as ‘Fat Bastard’.

Leeper has filmed several videos at Corbet’s Couloir in the past several years. This one in particular is generating buzz; it’s a mix of Leeper’s cliff hucks, twists and turns down Corbet’s Couloir and adjacent slopes, shot with drones, a helmet cam and his GoPro camera on the end of his very noticeable selfie-stick. 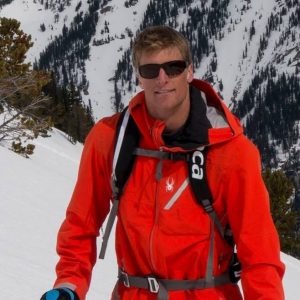 It’s both funny and impressive he can ski with one pole in some of the film’s best shots. OK, and perhaps a little narcissistic too, but, like dude…he’s skiing and killing it with one pole.

There’s a lot of crazy skiing here. You’ll notice several shots of Leeper navigating narrow crevices at high speeds that don’t leave much room for error. The highlight, though, has to be at 3:30, when he tells us what’s about to happen. Buckle up for that one. I love how he just cowboys up and hucks it off the cliff. Then, like a trooper, he gets on his feet and just keeps going.

Enjoy the video! It’s a whole lot of fun – and the song is ‘Bad Habit’ by The Kooks, by the way.