Some people take Halloween really seriously. Jesse Wellens – er, excuse me, Silver Surfer, seems to be one of those people, and was filmed this week surfing through the streets of Manhattan.

I submit this blog post as proof to you that Silver Surfer of Marvel Comics fame not only exists, he really likes to ham it up for New Yorkers.

And, of course, because it happens to be completely F***ing hilarious.

The video was shot this week and shows Wellens decked out with body paint as Silver Surfer whizzing through New York on a surf board fitted with an electric skateboard. It sure as heck looks like the real thing though, be it a board or whatever that thing was Silver Surfer rides in Fantastic 4.

Comic book studs, help me out here. What’s that thing Silver Surfer rides? Is it a surfboard? 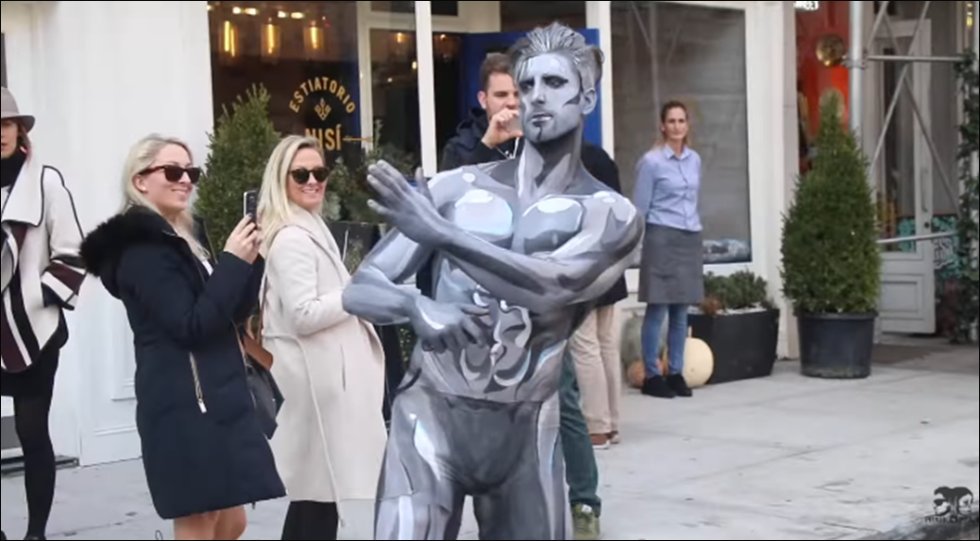 The Marvel superhero is a hit in the Big Apple

The stunt was a hit regardless. Watch as the ladies give a smitten thumbs up, the kids give a bewildered high-five and even the cops get a hearty laugh. My favorite moment however is about half-way through the video, in the cross walk, when a no-nonsense observer calls what he sees.

No hype, just the goods. Folks in the Big Apple aren’t the type to mess around.

This video may remind you of a similar stunt by Casey Neistat in January of this year, during which the YouTube star snowboarded through Manhattan during a blizzard.

Wellens has his work cut out if he wants a piece of the WTF magic in the streets of New York City. He’ll have to beat the guy dressed as Aladdin on a magic carpet and the guy in vintage 80s gear filmed skiing through Brooklyn last week.

Those New Yorkers – they’re a rare breed. I hope you enjoy this video as much as I did.