Shark Diving in Florida: The Basics

Shark diving in Florida can be a confusing topic.

It’s confusing because there are dozens of shark diving operators in the Sunshine State. Some need you to be dive-certified, others do not. You can also go shark cage diving in Florida. They’re among the many, many ways you can dive and/or swim with sharks in Miami, Tampa and the Florida Keys. But you’ll have to sift through a lot of data to get an idea of your options.

Why Shark Diving in Florida?

Here’s the thing about Florida shark diving; the variety of sharks you’ll see is among the best in the planet. It’s that good. Yes, say the words “shark diving in the US” and most folks think shark cage diving in California with great whites. But if you look at the number of shark interactions by state you’ll see there’s a clear winner. No, it’s not California or Hawaii. The sharkiest state is definitely Florida, according to Shark Week and I’m inclined to agree.

In California you can see great white sharks and perhaps the odd blue. But in Florida that list grows exponentially. Go shark diving in Florida and you can see any of the following species: 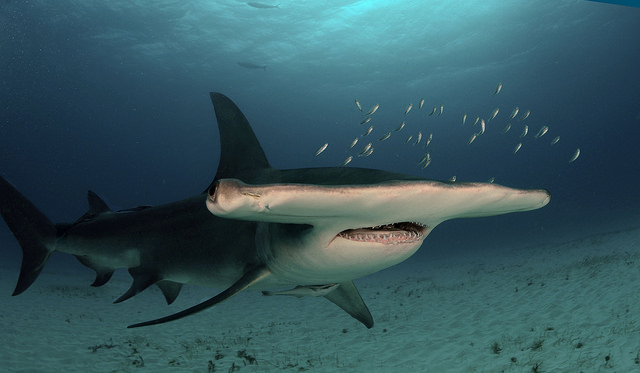 Florida and the Keys are home to the elusive but stunning great hammerhead shark. Photo Source: Albert Kok, Wikipedia.com

How it’s Different than Shark Diving in California

With that selection comes a variety of options that can make you wonder what the heck is going on. If you go shark diving in California you’re pretty much limited to white cage diving, or shark spotting from a boat (at Dana Wharf in Los Angeles). You can do all that and more in Florida. Go shark diving here and you can do one of the following:

Swimming With Sharks – Some tours will take you swimming with sharks. Yes, that’s about as simple as it gets.

Snorkelling with Sharks – Now add a snorkel and you can get a little more personal with your favorite predators. Incidentally, this is what I did the first time I went shark diving, when I snorkelled with black tip reef sharks in Thailand way back in 2004.

Scuba Diving with Sharks – This appears to be one of the most common ways to go shark diving in Florida. In this scenario, you dive with a group and a dive master typically attracts the sharks with bait. You sit back and enjoy the action.

Cage Diving with Sharks – This is an option as well.

Shark Spotting from a Boat – When you go out to see and, well, look at sharks from a boat.

See a pattern here? Neither do I – pretty much anyone can go shark diving in Florida, regardless of if you’re PADI-certified. Heck, you don’t even have to know how to swim if you go with the latter option we just discussed. Everything is on the table.

OK, so you want to go shark diving in Florida. Here’s the quick version of what you need to know: you can do it from Jupiter (in the Miami area), on the gulf side or in the Florida keys. You can go shark diving or spotting with any of the methods we’ve just discussed. The choice really comes down to your location and experience.

There are dozens of operators who offer shark diving in Florida. They range from large outfits like Florida Shark Diving to smaller operators that charter small boats out of various marinas. This is not an exhaustive list; rather, they’re among the better-known dive companies in the business, and tend to have a wide selection of trips and experiences to choose from.

Florida Shark Diving – From Beginner to Expert in Jupiter, Florida and the Keys

If you want to go shark diving in Florida, you’ll come across Florida Shark Diving. Three guesses what they do with a business name like that. Based in Jupiter, Florida Shark Diving has arguably the most locations of any shark dive operation I’ve seen in Florida. They cater to all skill levels too. Experiences are classified as shark diving or shark viewing. The latter is shark spotting from a boat.

Most of their shark diving is based out of Jupiter – about 87 miles north of Miami – although they do some custom dives in Miami and the Keys as well. Note that Florida Shark Diving also does shark diving tours in California, but then it wouldn’t be shark diving in Florida, would it?

Where: Jupiter, and custom dives in Miami and the Florida Keys.

What They Offer: Everything 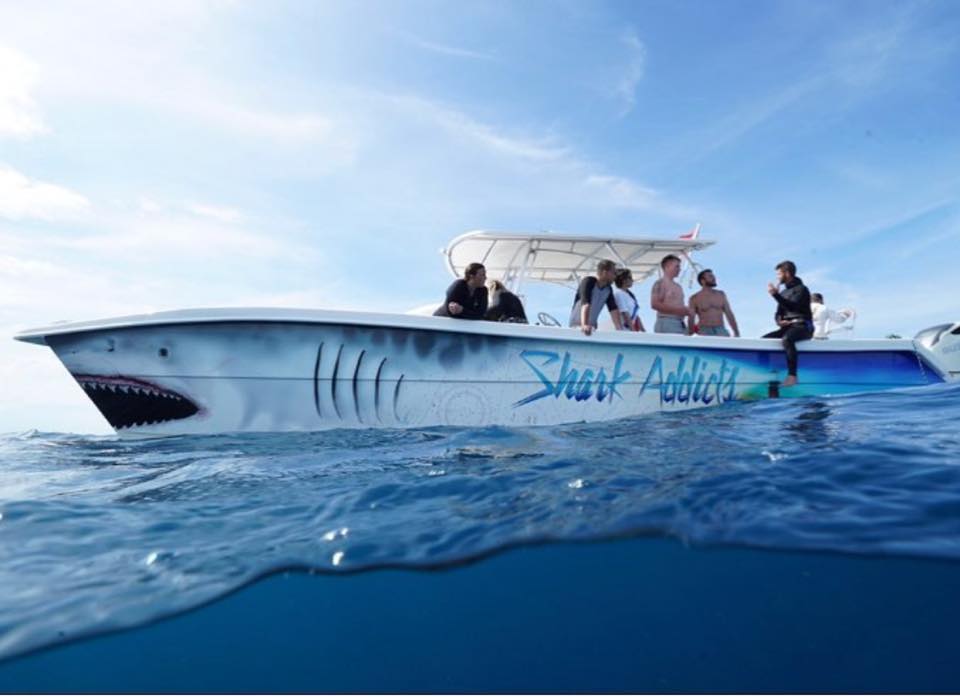 Shark Addicts – For Snorkelling in Jupiter with Some Major Shark Fanatics

Shark Addicts is another shark diving outfit in Florida. Unlike Florida Shark Diving, Shark Addicts are limited to the Jupiter area. Don’t hold that against them though – Shark Addicts are fanatical shark lovers and seem passionate about their conservation. This is a 4 hour snorkelling experience. They provide the mask, fins and snorkel.

There’s definitely a Point Break-ish/eco-warrior vibe here, so if you’re an eco-warrior at heart, this is your tour. One note, however – Shark Addicts does not allow GoPro/underwater cameras. They do have a videographer to film your experience if you like.

What They Offer: Snorkelling (4 hours)

Calypso Dive Charters is exactly what that name implies. They have two options: snorkelling and scuba diving. Each option is done twice a day, about 30 minutes off the marina at Riviera Beach, within Palm Beach county. Their dives are typically smaller groups, which can be more enjoyable  than a dive with 20+ other divers. . Visibility is typically quite good here – you can often see 50+ feet. And if you’re very lucky, you might see a giant hammerhead shark.

What They Offer: Snorkelling and Scuba Diving