So you’ve seen Shark Week and you want to go shark diving in Cape Town.

I assume you mean cage diving yes? And with great white sharks? You’re in the right place – along with Australia’s Neptune Islands and Guadalupe off Mexico (and shark cage diving in California), South Africa is one of the three great white hot spots on the planet.

Of course, South Africa is, well, South Africa. It’s on the other side of the planet for North Americans and comes with challenges that make cage diving here a different beast than at, say, Isla De Guadalupe. With the benefits come the drawbacks. For shark diving in Cape Town, those include:

Getting to South Africa

On the latter point, there is no specific travel warning for Canadians going to South Africa at the time of this writing, but Cape Town can be dangerous for tourists – especially at ATMs, and may not be advisable for novice travellers. 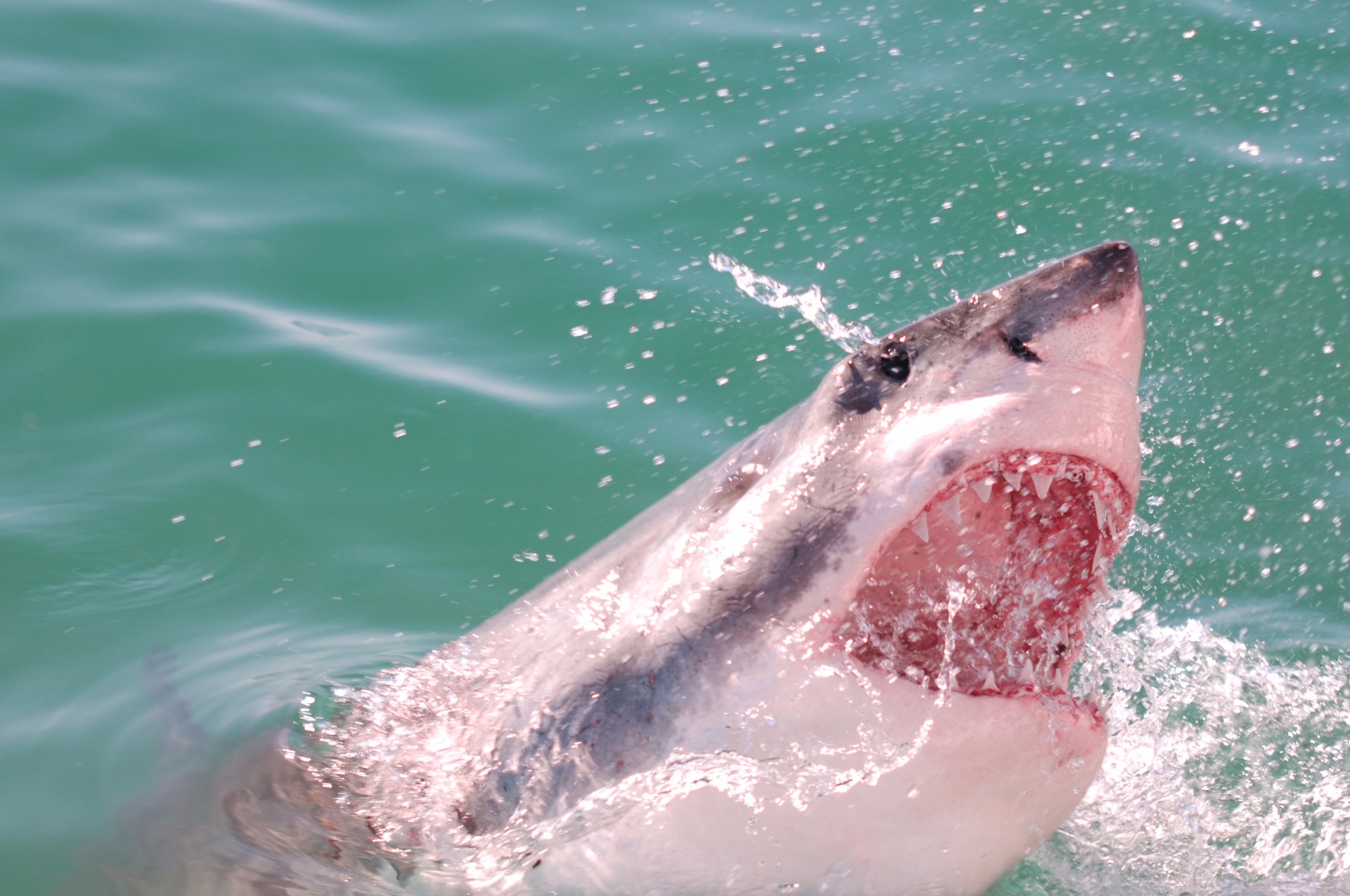 Unlike Guadalupe, which is about 280 miles south of San Diego, most of the shark diving hot spots in South Africa are within two hours of Cape Town. That means you don’t have to live on the boat, which opens up more tour variations.

At Guadalupe, you live on the boat for 5 days. But Cape Town’s proximity to Gansbaii and Dyer Island allow for day trips or shark diving over three, five, even seven days.

Opt for the latter and many shark diving operators will combine cage diving with other activities around Cape Town, like wine tasting and sightseeing around the city.

Still, shark diving in Cape Town does have drawbacks. The visibility here is respectable, but you can see 100+ feet at Guadalupe on a clear day.

The water around Cape Town seems murky – at least from what I’ve seen.

Forget what you saw in 47 Meters Down. Most shark cage diving operations are done with stern-mounted cages. That’s how it was done when I went cage diving at Guadalupe and that’s typically how it’s done in South Africa as well.

Cape Town is a base for shark diving at Gansbaii. Shark tours here can be booked by the day, three days, five days and other variations.

You’ll generally pay about 1650 South African Rand for a day trip. That’s about $173 Canadian Dollars at the time of this writing.

The best time of year to see great white sharks around Cape Town is during South Africa’s winter – June-September. You’ve got a good chance to see multiple sharks during these months.

January to March is low season. Bear in mind, however, you can go shark diving at Cape Town all year – unlike Guadalupe – because the sharks tend to linger here. June to September is the best conditions, but the shark spotting in South Africa is good year-round.

Time it for June to September if possible, but don’t skip out on a dive if you’re here in January.

Each offers a variety of tours, from daily trips to five days and even a week of shark diving. They’ll usually help you find accommodation in South Africa, and might bundle them with shark diving if you ask politely:

Shark Adventures – Based at Gordons Bay (about 57KM from Cape Town), Shark  Adventures typically goes diving at Dyer Island, near Gansbaii, or Seal Island in False Bay – where most of the ‘Air Jaws’ shows were filmed.

Marine Dynamics Shark Tours – Another large shark-diving outfit, Marine Dynamics is based in Gansbaii and offers a good selection of tours and support. They also offer accommodation at their ‘Great White House’ and volunteer opportunities if you want to make great whites the focus of your life work. 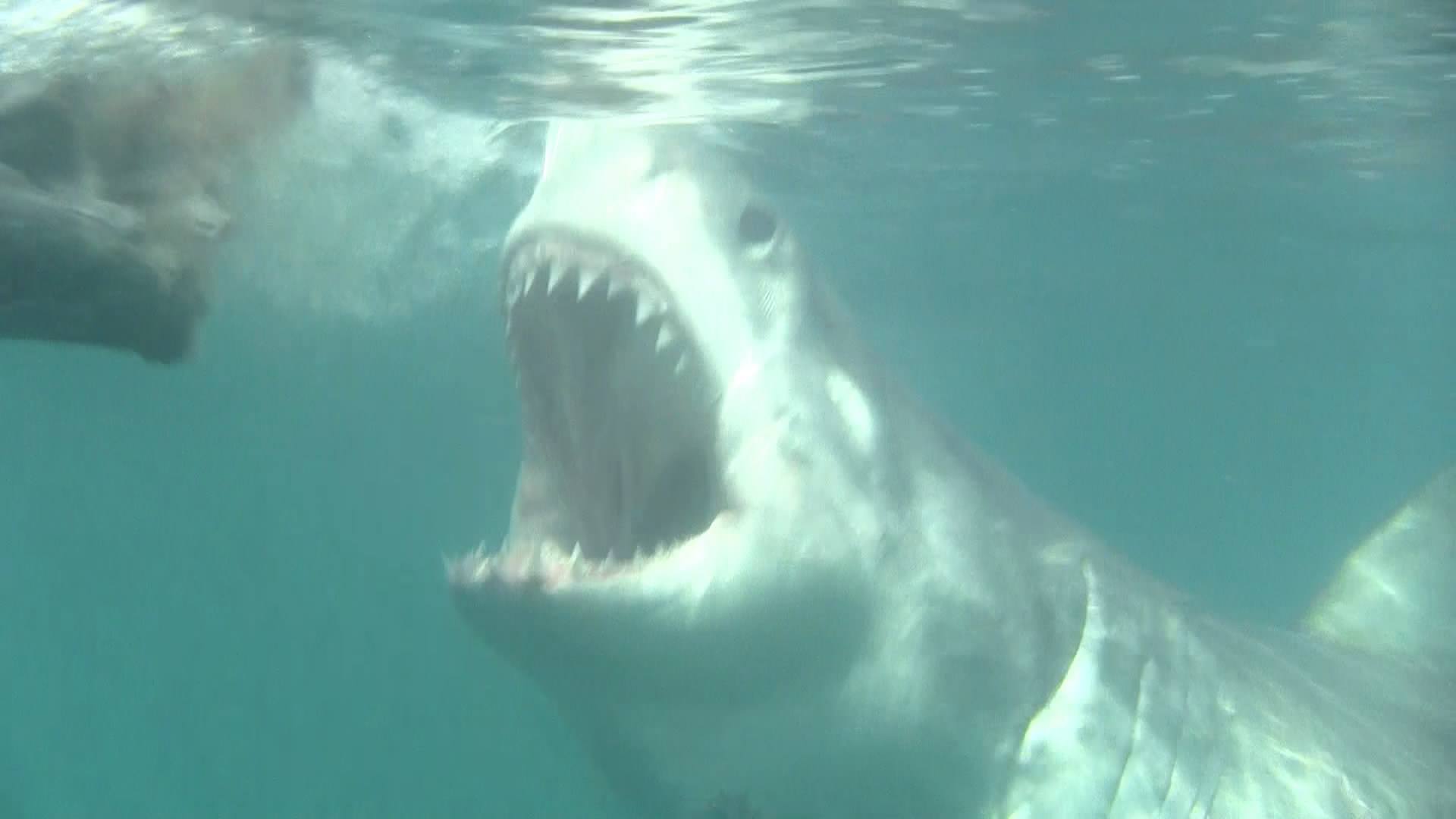 Book Ahead – Shark diving at Cape Town is a popular experience. With an average 12 spots per boat, spaces are limited, and they fill up quickly.

Stay In (Or Close) to Gansbaii/Simon’s Town – Gansbaii is a good two hours drive from Cape Town. That’s two hours you’re not sleeping, or, alternatively, at least four more hours in a car if you don’t see sharks on your first day and head back for a second try.

Think Fast – Shark diving at Cape Town is a well-oiled and choreographed machine. Yes, it’s about conservation, but it’s also about making money. Your operator will likely explain things on the go.

Get In Your Wetsuit ON SHORE – I can personally attest to this one. Ever tried squeezing in to a wetsuit? Now try doing that on a slippery (possibly rocking) deck with 20 other divers. Ask in advance if you can change on land.

Be Ready for Chop – The waters off Cape Town are notoriously choppy. You may want to take motion sickness pills the night before your dive.

Prepare to NOT See Sharks – It’s possible you’ll get ‘skunked’ (not see sharks) on your dive. This happens – even at Guadalupe. Most operators will give you a voucher for a free return dive in this event. Keep your expectations low and any sharks you see are a bonus. Keep part of your trip flexible, so you can do another dive with the voucher in the off-chance your sharks play elusive.

You May Go On a Different Boat – Many shark diving companies in South Africa are just booking agents and will send you on a boat with a different company. This happened to me at Guadalupe and it happens when shark diving in Cape Town as well.

Dress Warm – It’s cold out on the water. Just don’t dress well – you’ll be on the smellier side when you get back if you do.