The late Valery Rozov was the first (and to date, only) person to BASE jump from Mt Everest and thus complete Birth of Sky from the Ozaki 8. Yet his untimely end sheds light on another credential that would make any extreme athlete resume look pretty: he successfully BASE jumped five of the Seven Summits – the tallest peaks on each continent.

You may have heard of the Seven Summits in extreme sports circles. Like the Ozaki 8, they’re linked to an ‘impossible’ challenge: climb the highest mountain on every great land mass.

You know the obvious ones, like Everest in Asia and perhaps Denali on North America. Lesser known are the peaks of Oceania and Antarctica.

The Seven Summits list is controversial. For example, the tallest mountain in Europe is Mt Blanc, yet Russia’s Mt Elbrus is a good 800 metres higher. So why not make it part of the ‘official Seven Summits’? Because Russia is a European country – yet from a tectonic perspective, it’s really in Asia.

OK, so you want a list. The 7 Summits will vary, according to who you ask. For argument’s sake, I’ll go with the highest peak on each tectonic plate because, well, it’s geology. People make borders – not the shifting plates that comprise and make planet Earth the dynamic place it is in the first place.

Going by that logic, the Seven Summits are the following:

Ironically, the 7 Summits are not the most difficult climbs on the planet. They’re simply the highest (any mountaineer will tell you that K2 is more difficult than Everest!). Still, the Seven Summits are the tallest peaks on each land mass. Using this list, the 7 Summits in Order of Difficulty would likely be this: 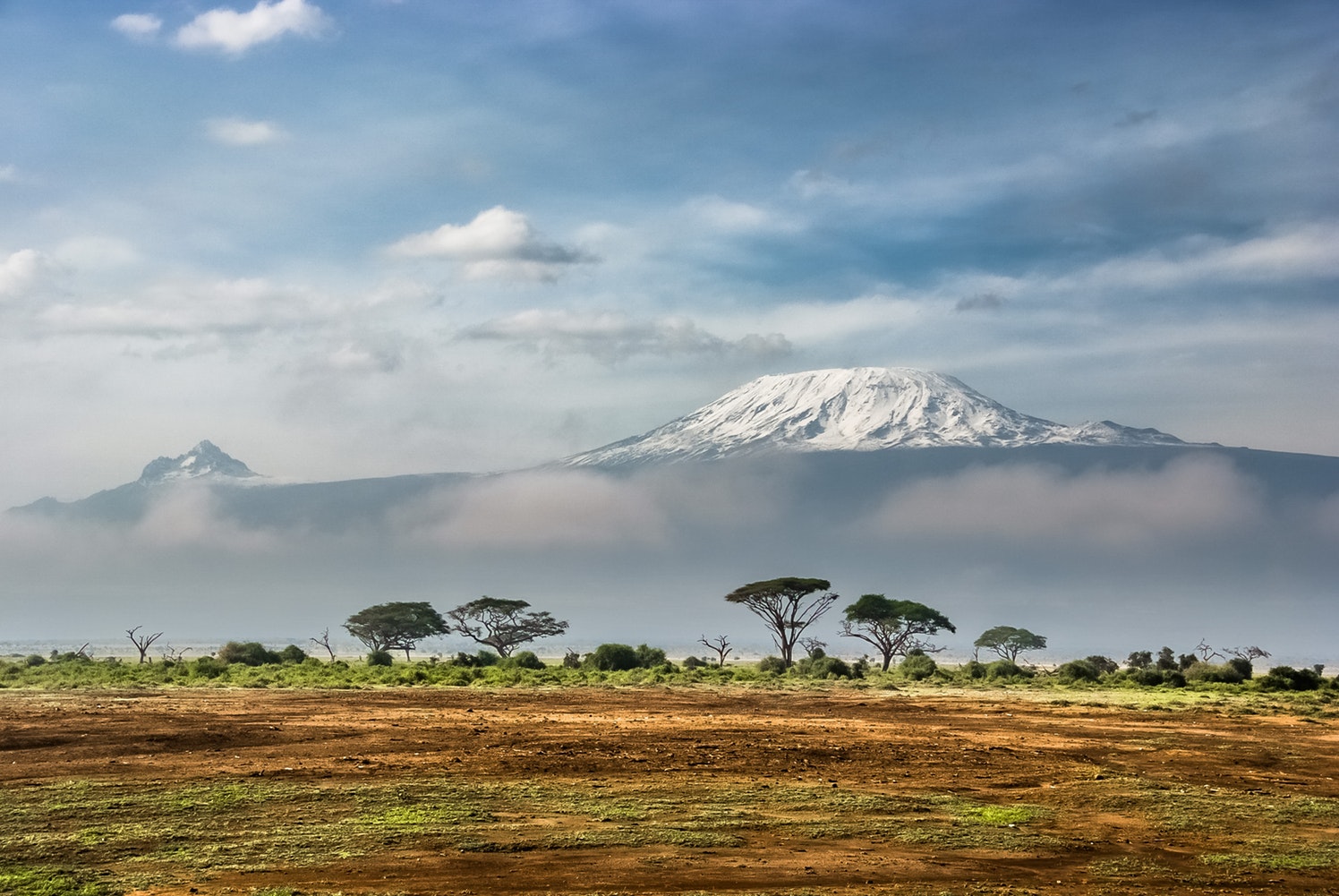 Mt Kilimanjaro in Tanzania, Africa, is the easiest of the 7 Summits. Photo by Sergey Pesterev on Unsplash

For all you’ve heard about Mt Kilimanjaro – tallest freestanding mountain on Earth and one of the most impressive – it’s easier than you think. You can take one of several routes up this towering mass in the African plains, ranging from easy to moderate, in which you’ll marvel at the mountain’s vast range of flora and vegetation.

It’s no cake walk, but it’s stunning, and the terrain is generally low-angled. You don’t need much rock climbing experience to climb this easiest of the Seven Summits of the Earth.

Sorry Mt. Blanc and day-trippers from western Europe, but the tallest mountain in Europe is actually Mt. Elbrus in Russia’s Caucasus Mountains. Still, it’s easy enough that you don’t need to be full-on Rock Jock to climb this mountain that divides Asia and Europe.

You’ll need the basics of rock climbing to climb Elbrus and know your crampons from an ice axe. But if you’re in reasonable shape and comfortable with rope climbing on short but steep slopes, you should be good to go.

Professional climbers like to use Argentina’s Mt Aconcagua to train for the Himalayas. It’s the highest point in South America – part of the Central Andes and climbing in height and the skill (and fitness) required among the Seven Summits of the Earth. You want to be in good shape to climb Aconcagua; certainly strong enough to carry a 25kg backpack for extended periods.

You’d also need the basics of rock and snow climbing, though you could likely pick it up on site with a guide.

Mt. Vinson is one of the more difficult of the Seven Summits for several reasons. The most obvious of those? It’s in Antarctica, and in the middle of, well, nowhere. Add ice to the equation too – you’d need to be well-trained in mountaineering to climb Mt Vinson. Poly extreme athletes take note: Mt Vinson would need plenty of cross-training, be it in the pool, a bike, and the strength to carry heavy packs over much of Antarctica. 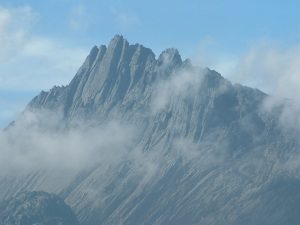 The climbing only gets more difficult as we get to Indonesia’s Puncak Jaya (also called Carstensz Pyramid). Like Vinson, Puncak Jaya is in the middle of nowhere – albeit, with more of an exotic flavour. This is rough going though; expect steep terrain, rope climbing, crampons and lots of rappelling. It’s in the jungle too, meaning you can expect long days in extreme conditions.

You need to be in top shape to do Puncak Jaya, mentally and physically. This is not a climb to learn as you go.

OK tough guy, the shit’s about to get real at Mt. Denali. Growing up, you knew Denali by its former name, Mt McKinley. Obama changed it to Denali in 2015 – he DIDN’T change the harsh conditions that make Denali one of the hardest of the Seven Summits. Think steep angles, snow camping, lots of rope climbing and most other tools in your rock climbing tool bag. Denali throws pretty much everything at you.

Denali is for experienced climbers only – and in excellent shape at that. 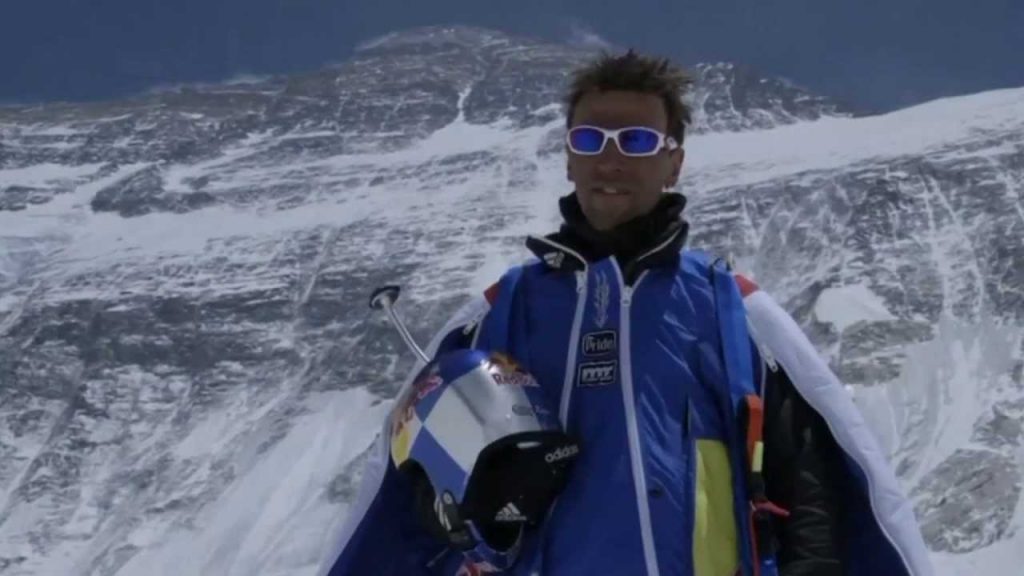 Valery Rozov was 48 years old when he BASE jumped Mt. Everest in 2013. Photo Source: YouTube.com

Welcome to the pinnacle of the Seven Summits. Those rumours you’ve heard about seeing dead bodies on Everest? It’s cold, hard fact – you may see corpses as you climb Everest because, it’s Everest. The tallest point on Earth is the hardest of the 7 peaks we’ve talked about. Then again, it’s Everest. Train hard and accept the risk. Sock some money away and think big. You’d need all of them and the skill and fitness of an extreme athlete to even think about climbing the world’s most famous mountain.

About 350 people have climbed the Seven Summits as of August 2016 according to, um, 7 Summits (how’s that for a relevant name?). Just as impressive, Valery Rozov had BASE jumped from five of them, including Everest and Kilimanjaro (plus, he does a little jig at the end of the latter). The two he missed? Denali and Puncak Jaya.

Action Step: Start With the Basics

Assuming you’re giddy at the thought of the Seven Summits being your new life purpose, let me remind you that mountaineering is an extreme sport. That means it’s dangerous – while a highly rewarding pastime, this isn’t something you do with your eyes closed.

It’s a sad truth that you’re on your own if you have an accident while mountain climbing. Sending a rescue party after you at that altitude puts many others in harm’s way. You climb, you accept that risk. While it usually pays off, the lessons can be harsh.

If you accept those risks, consider rock climbing. It’s the basis for the skills you’d employ on the Seven Summits. From there you could advance to the more demanding regimen of mountaineering which would add further skills to your climbing resume, like survival, ice climbing, navigation and endurance.

Yes, you’re a very capable person as a professional mountain climber. Consider the ‘Canadian Rockies Mountaineering Course‘ by Great Canadian Trails for a 6 day introduction to the rigours of mountaineering (that’s an affiliate link).

Or try the ‘Climb Kilimanjaro: 8 Days Lemosho Route‘ (also affiliate link) to get both the basics of mountaineering and a jump start on your journey up the Seven Summits, and blaze a trail few people will follow.