If the Earth is a temple, your words may fail you at Son Doong cave in Vietnam.

Think of everything you hold dear from this planet: beauty, wonder, mystery and awe perhaps. Now pack those feelings in an enormous cavern carved in limestone that runs more than 5 kilometres (3.1 miles) in length and that’s both 200 metres (660 feet) high and 150 metres (490 feet) wide.

You’re now standing in Son Doong cave, which was only discovered 25 years ago and just recently explored for the first time. You’re in the biggest cave on the planet – which you can explore here in a virtual tour with National Geographic. Be sure to have the sound on because it’s pretty humbling.

Surprisingly, Son Doong cave (also called Hang Son Doong) is quite new within caving circles and on the ecotourism map; it was discovered in 1991 and became known internationally only in 2009, when a group of scientists from the British Cave Research Association surveyed the cave and noted several findings that brought it to the world’s attention. 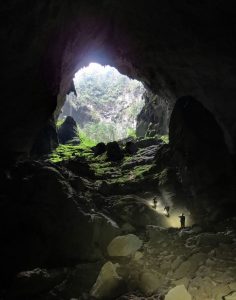 Son Doong cave is traversed by a massive cross-section that gives it more area than any other cave on the planet – including Deer Cave in Malaysia (currently listed as the second-largest in the world) and Mammoth Cave in Kentucky, which is actually a series of caves rather than a single cavern, and which puts Son Doong cave firmly on the throne as the world’s largest – and one of the most fascinating.

Son Doong cave has some of the largest stalagmites on the planet, at over 70 metres high, and is characterized by two large dolines – sinkholes – where the ceiling has collapsed.

You can actually visit the latter here and see the vegetation and unique ecosystem that has adapted to and thrived as sunlight permeates into the massive cavern below.

It’s an understatement to say Son Doong cave is highly sensitive. The cave has developed for (presumably) hundreds of thousands of years and would understandably not fare well with throngs of tourists.

For that reason, the Vietnamese government has wisely restricted access to the cave; you need permits to visit. As of 2016, Oxalis Adventure Tours is the single operator allowed to lead visitors through this fascinating ecological gem in southeast Asia, though National Geographic was allowed to map the cave with a drone in 2013, and provide you with the virtual tour linked to in this post.

Still, it’s worth the trip if you’re in the area. Son Doong cave will make you fall in love with the planet, and after a three-day tour you’ll agree with Bodhi that the Earth is indeed worth fighting for. Don’t try to BASE jump here or do any thrill-seeking. Just be – listen, observe, and be at one with this planet, in this hidden natural treasure that needs our protection.

Watch the National Geographic documentary below to learn more about Son Doong cave and what it means to our understanding of the planet. Thanks for bringing this to our attention, Sayeesha!