Let me preface this by saying Russian BASE jumper Otmashka Dubinina won’t make any short-lists for a PR position any time soon. She’s petulant, a little cocky, and couldn’t give two FCCKs about the cops trying to take her in.

This BASE jumping video, shot last June on the 1,150 foot high Aizhai bridge in China, pretty much clarifies her position on authority. It rankled more than a few feathers in the BASE jumping community and on YouTube when it was released last year.

Otmashka Dubinina is a daredevil and a bit of a disturber. Small, and fiery, she’s not what typically comes to mind when debating extreme athletes with your Grandma over a cup of Chai.

A goodwill ambassador for BASE Jumpers International she ain’t. So why I am blogging about her?

It’s quite simple really. Otmashka Dubinina may be cocky, but she’s a damn fine showman. There’s a little of everything here – an anti-hero, bumbling cops (well, OK, they’re not bumbling), and a cocky selfie as they desperately try to stop her from jumping.

The cops actually took her in on their first attempt. But she returned 30 minutes later, climbed the rail, and with possibly the biggest shit-eating grin in history, takes the plunge and looks right inside you. 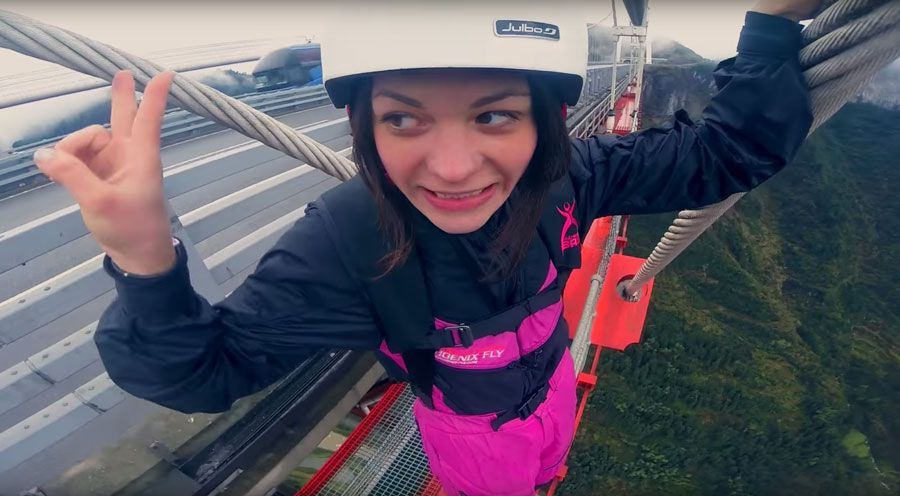 For all the bravado and comedy that took place before jumping, she looks remarkably calm while she’s in the air. My favorite part of this video is at 1:25, just after she’s jumped, and looks at the camera – and directly at you.

I’m not sure the right word for that look: Catharsis? Arrogance? Or maybe a little of both – with some zen thrown in for good measure. Add “zero fccks given” and you may have you answer.

I don’t advocate for a second what she’s doing because there’s clearly a double standard here. Folks would be trashing this jumper if it were a guy, and Dubinina (kind of) gets away with it because she’s – well, she’s kinda cute, agreed?

Still, I don’t think Otmashka Dubinina gives a flying fig what you or I think of this video. It’s her moment, and we’re here just for the ride. Lucky for us, it’s a stunning one, and for that, we thank the BASE jumping gods for Otmashka Dubinina.