If you’ve seen the new Point Break, or even Planet Earth, you’ve seen the Cave of Swallows.The massive cave shaft in Mexico’s San Lui Potosi region (about 500km south of Mexico City) doesn’t typically show up on your average itinerary of South America. But it should if you’re into BASE jumping or you’re considering an even bigger challenge:

The Cave of Swallows was the site of Awakening Earth – the third ordeal from The Ozaki 8.

The Cave is massive. Yet beyond its size, it truly is a natural wonder. Think of it as a portal inside the bowels of the Earth – one that would take you a full 10 seconds of freefall without a parachute, and a highly fitting place to perform the Awakening Earth ordeal outlined in the movie.

A Hole in The Earth

Long before someone at Warner Bros’ thought to remake a movie that didn’t need to be, BASE jumpers have jumped into the Cave of Swallows. It’s the world’s largest cave shaft, with a 49 by 62 metre opening and a 370 meter (1,214 foot) drop from its highest point to the guano-filled floor below. 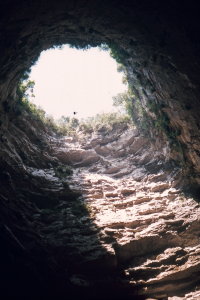 Bodhi performed the third ordeal from The Ozaki 8 at the Cave of Swallows.

You could easily fit the Empire State Building in the cave. Hence its popularity with BASE jumpers, who’ve made the cave a popular place to pose for pretty pictures before the oft-performed backflip into the darkness below.

Climbing back out of it can take 40 minutes to over two hours, or just 10 minutes with an extraction rope.

In the new Point Break, Bodhi and his crew blew up the back of a plane carrying a shipment of currency (‘liberating’ it to the impoverished folks below) and BASE jumped into the cave. In doing so they actually performed The Ozaki 8 ordeals two (Birth of Sky) and three (Awakening Earth). That’s not something I’d recommend you do, but with some BASE jumping experience, and if you know the risks, The Cave of Swallows could be done, unlike many of the ordeals from that movie that has people talking…

How to Get to the Cave of Swallows

The Cave is a good 8 hours away from Mexico City by land. You’ll want to take a tour to do this; Mexico is not always the safest country for solo travel, but it’s usually fine in groups.

If you want to see the Cave sans that whole BASE jumping thing, I’d recommend a tour from Tour Radar. Try the Huasteca Potosina Jungle Adventure. Confirm they do the Cave of Swallows but it looks like it’s on the itinerary. They’ll pick you up in Mexico City and take you through this mystical region that’s inspired adventurers for hundreds of years.

Use this link for a discount. Food and accommodation are provided as well.

You’ll need a car or public transport to get to Aquismon if you want to go it alone, from where you can hire a truck straight from the plaza. It’s 20 to 40 minutes from there. Bring camping gear – there’s a camping area next to the cave.

However you see it, the Cave of Swallows is the Awakening Earth. Put it on your itinerary, be it for The Ozaki 8 or just as an intrepid travel looking for adventure, it’s a spiritual journey that may change your perspective.