Life of Water: Surfing and The Ozaki 8

Life of Water is the fourth ordeal of The Ozaki 8 from Point Break. While we briefly see Bodhi and his crew do Awakening Earth (an air-to-Earth transition BASE jump) near the start of the film, this is the first of the Ozaki 8 trials we see in great detail.

Life of Water is a surfing challenge. Like the original movie, it’s the crux of Point Break, despite all the extreme sports seen in the remake. That’s reinforced when Bodhi and Johnny Utah first encounter each other while surfing a set of massive waves off France (or so we’re told), and again at the end of the film, when Bodhi repeats Life of Water, and ends his life while big-wave storm surfing, like Patrick Swayze’s Bodhi 25 years earlier.

Like most of the Ozaki 8 ordeals, there is really no set criteria for how to complete Life of Water other than you’d need to surf a very large wave. The film uses a storm or ‘rare weather phenomenon’ for dramatic license, yet as I’ve mentioned in earlier posts, monster waves are a common occurrence just south of where the scene supposedly took place, in Nazare Portugal, where Garret McNamara is believed to have surfed a 100 footer in 2013.

The plot tells us Life of Water was done off the coast of France during a freak swell that happened roughly once a decade. It’s not a storm, but rather, a huge set of waves that breaks at sea, creating massive waves when the influx of water collides with a submerged island. 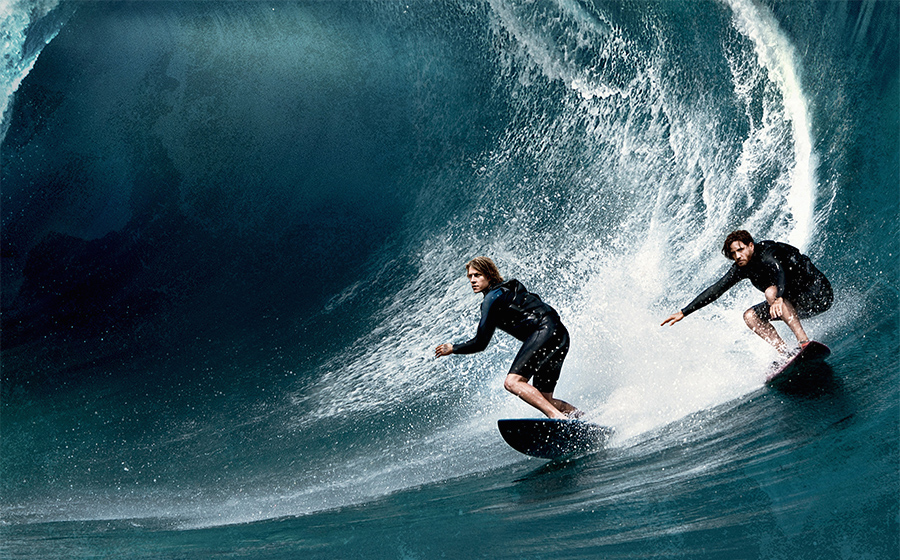 The Life of Water Ozaki 8 trial (Point Break 2015) was filmed at Teahupo’o in Tahiti.

That’s plausible. Indeed, a similar effect happens at Cortes bank – a barely submerged island roughly 96 miles southwest of Los Angeles, and the outermost of the Channel Islands – where the final scene from Point Break takes place and is filmed on location.

But the first Life of Water (in which Utah snakes Bodhi) was actually filmed at a famous surf break in Tahiti, called Teahupo’o, known the world-over for its stunning, yet exceptionally dangerous monster waves.

It’s no coincidence that Teahupo’o typically hosts some of the world’s most prestigious surfing tournaments, like the Billabong Pro Tahiti, which surf legend Kelly Slater won just two weeks ago.

Other Spots Life of Water Could Have Been Done

The film makers left most of the Ozaki 8 trials open to interpretation, but Utah mentions ’60 feet’ at one point. Going by that, an extreme athlete might want to aim for that lofty size before checking Life of Water off his bucket list.

That may work for big wave surfers like McNamara, Laird Hamilton and Kala Alexander, but it’s unlikely a regular Joe would pull this off. Note the youngest of these guys is Alexander, at 47. The point being big wave surfing takes years of mastery with one focus – surfing -and that makes the likelihood of completing all Ozaki 8 ordeals much less realistic. 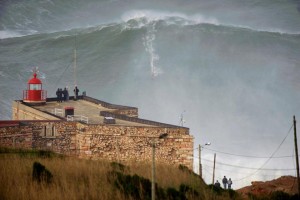 Still, it’s possible to surf a 60 foot wave. Many locations regularly get this sort of action, with big wave surfers – who’ve done their time and earned the right to try these waves – intent on going bigger by the year.

Nazare – On the central coast of Portugal, Nazare gets rolling in October. It’s where McNamara is believed to have ridden the largest wave ever surfed.

Waimea Bay – On Oahu’s North Shore (near Pipeline and Sunset Beach), and just a 45 minute drive north of Honolulu.

Mavericks – A legendary big wave surfing beach south of San Francisco (near Half-Moon Bay), where surfer Mark Foo had an eerie demise in 1994.

Ship Stern Bluff – Arguably the most prestigious – and dangerous – big wave surf beach in Australia, on the southeast coast of Tasmania.

Where does this leave you? Life of Water is a big wave surfing challenge. It’s possible, but unlikely – and of course, it’s dangerous. But learn to surf and stick with it – as one young dude tells Keanu Reeves back in 1991, “Surfing’s a source. It’ll change your life, swear to God.”

Watch this massive swell off Nazare and you’ll see what he means. Enjoy!