Life of Ice and The Ozaki 8

Life of Ice is a snowboarding challenge and the sixth ordeal of The Ozaki 8. The challenge is to ride an ‘unridden’ line that is beautiful and one that only someone who’s certifiably nucking futs would even think about.

In Point Break (2015), Life of Ice is performed the day after Life of Wind high up in the Alps and filmed at Aigulle de la Grande Sassiere, between France and Italy.

Like most of the Ozaki 8 ordeals, Life of Ice is notoriously vague and would simply require an extreme athlete to ride a line that’s never been done. You’d likely need a helicopter for that – as Bodhi and company did when they did the ordeal. And that’s another issue, because it’s hard to claim you’re an eco-warrior while being traipsed around in a helicopter guzzling 30 gallons an hour.

Life of Ice is a Snowboarding Challenge

Life of Ice is designed to test your mettle on the most dangerous ski slopes on the planet. They’re actually not ski slopes, per se, but rather the toughest snowboarding terrain the Earth can throw at you. 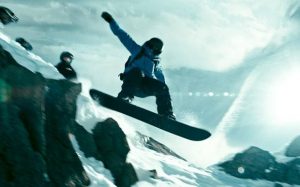 It’s in this ordeal we see the first fatality among Bodhi and his crew as they try to complete The Ozaki 8. You’ll recall Chowder slips in this scene and meets an icy demise after Johnny Utah finds a line that looks simply ridiculous and pushes the men to follow him down.

While some guys might try this, you can likely see a few holes in the logic at work here. Namely, how do you find such a run and NOT use a helicopter? How can you tell if a line has never been ridden? And would you feel comfortable putting search and rescue at risk when you do the inevitable and go out of bounds?

Still, it is possible to ride a line that’s never been ridden. Watch this video of a tight snowboarding crew who just kill it down the Andes in this post from two years ago.

Check Out These Scary Ski Slopes Instead

I get that you want to do Life of Ice and the other nifty stunts from The Ozaki 8. That’s not possible for the vast majority of folks like you and me. As Utah reminds us, an extreme athlete would likely have to train for decades to even try one of the Ozaki 8 ordeals.

You’d be a very old man when you made it to the mountain for Life of Ice – to say nothing of the fact the Inga Rapids likely would have chewed you up long before you got here.

Let’s aim for something a little more realistic, like these notoriously scary ski slopes. They’ve been ridden, yes, but by few people – just look at these runs. I doubt Ono Ozaki would have anything but a hearty slap on the back if you tried the following:

It’s a little disheartening to know you can’t even enter the climb zone to Delerium Dive without avalanche gear and a watchful buddy. Those not intimidated by such prerequisites are greeted by 55 degree gradient chutes and a ski run that may chill the heart of even the most expert of skiers, and cult-like status for the few who pull it off.

Not 300 kilometres to the west – and in my home province of British Columbia – Kill The Banker is a ‘fun’ scary slope. That’s assuming your idea of a good time is doing one of the steepest slopes anywhere, and being forced to jump a waterfall half-way down.

Corbet’s Couloir may be the scariest ski slope in the United States. It’s certainly up there with the most intense slopes on the planet. You commit the moment you try it, with a 20 foot drop off a ledge, after which you’re ‘treated’ to a 40 degree drop that looks bottomless. The intimidation factor is big with this one – along with the reward, for you get major bragging rights and a brass set of cojones for the courage to try Corbet’s Couloir.

And the knowledge you’ve honoured the Earth your own way, through Life of Ice: a trial of man and winter, that most chilling force penned by Ono Ozaki.