If you’ve ever wondered why there are so few great white sharks in British Columbia, look no further than South Africa at the moment.

It’s a sad – or reassuring, depending on where you fit in the killer whale vs great white shark scheme of things. If anyone ever told you that great white sharks were the ultimate bad boys of the ocean, well, it just ain’t so.

Four dead great white sharks have washed ashore in South Africa since March, including one this week. It’s the latest in several fascinating cases of killer whale vs great white shark we’ve seen in the past 20 years, none of which ended well for our friend the White Pointer.

This week’s gruesome discovery is part of a trend we’ve seen in South Africa since March. White sharks are turning up dead, many near Gansbaai, one of three shark diving hot spots on the planet, where the sharks typically patrol their waters with little competition.

Yet there’s a morbid detail to each of the killings; each dead shark was relatively intact, save a gash in each carcass. All four sharks were missing their liver – an organ high in a compound called squalene.

Marine biologists have confirmed the killings were done by killer whales, who appear to be targeting the sharks for their delicious innards.

Orcas have been seen killing white sharks at least 3 times in the past 20 years. Photo Source: YouTube.com

Killer Whale Vs Great White Shark: Tale of the Tape

The sad trail of dead sharks makes more sense than you might think. While it’s hard to see a great white shark for anything less than the ocean’s top predator with creepy teeth, it’s also misleading.

White sharks have the teeth. But look closer and there’s really no contest. 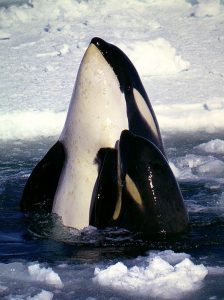 Killer whales can be twice the size of a great white shark. Photo Source: Wikipedia.com

In this corner we have Orcinus Orca. He comes in at roughly 20-26 feet in length and weights close to six tons. He travels in packs of up to 40 other like-minded killer dolphins and has been seen throwing his prey 80 feet in the air! From every ocean on the planet, HHHEERRRREEEEEssss the one and only “KILLER WHALEEEEEE!!!!!”

And in this corner we have Charcarodon Carcharias. He comes in at an average 11 to 15 feet (with really big guys pulling 20!) and hits the scale at a maximum two tons. He’s generally a lone wolf and likes to do his own thing, but take a look a those teeth folks. There’s nothing like them! This issssss…the one you’ve been waiting for… “GRRRRRRREAAAAAAATTTT Whiiiiiiiiiiiite SHARRRRRRRRKKKKK!!”

Apologies to Michael Buffer for destroying his handiwork, but I’d love to see him do that introduction for Shark Week.

Joking aside, when we compare the killer whale vs great white shark, we see the latter is clearly at a disadvantage. He’s got those teeth – yes – but he’s roughly half the size of an orca. That’s made worse for white sharks when you consider orcas travel in groups. They hunt together and are highly adaptable.

They’re also very intelligent, precise, and as we’ve seen in South Africa, have a taste for the macabre. Cue Hannibal Lecter and his fava beans…

These most recent shark killings are the third case we’ve seen in recent years of killer whale vs great white shark. In 2015, a pod of orcas killed an adult white shark well known among shark divers in Australia.

More famously, though, was an extraordinary interaction between a killer whale and great white at the Farallon Islands off San Francisco.

That event was the first time orcas had been seen predating white sharks. It was caught on film too – and marked a turning point in our understanding of great white sharks and their role in the oceans.

I’ll end this post with a documentary film that National Geographic made about that attack back in 1997, called The Whale That Ate Jaws. It’s compelling, a little humbling, but if nothing else, is a not-so subtle reminder that on land or in the ocean, there’s always a bigger fish.