Maybe it’s the fact that Autumn is just around the corner, or – more likely – because I’m listening to The Fog soundtrack by John Carpenter while writing this, but lately I’m fascinated by the rather morbid tale of the Tillamook Rock Light on the Oregon Coast.

The creep factor is high in this story – the Tillamook Rock Light is an abandoned lighthouse a mile off Ecola State Park. When built, it was the most expensive lighthouse on the west coast of North America. One man died building it, and another was killed when the exiting lighthouse keeper wouldn’t give up his post.

Perhaps even creepier, though, are the urns of human remains still lying within the old lighthouse. They’re still there, 37 years after a morbid turn that made the reclusive place a columbarium for the newly departed – all of which make Tillamook Rock Light one of the darker destinations in the Pacific Northwest.

The lighthouse was commissioned by the United States Congress in 1878 and built from 1880-1881. Construction took longer than anticipated at 500 days, and claimed the life of surveyor John Trewavas, who slipped between his boat and the rock.

More lives were lost in January 1881, near the end of construction, and before the light was lit, when a boat called the Lupatia ran aground and sank nearby.

16 dead bodies washed ashore at Tillamook Head the next day, though happily, the ship’s dog survived the carnage.

The light was lit for the first time on January 21, 1881, and housed four keepers to maintain operation. 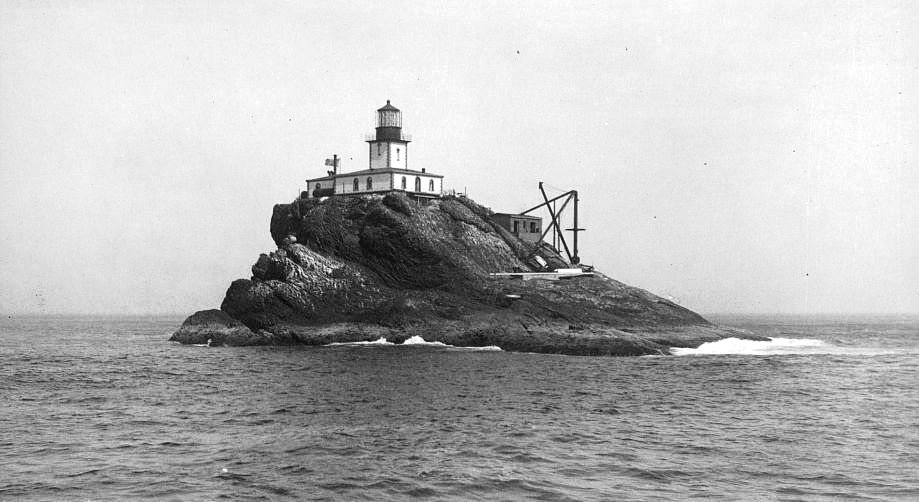 Tillamook Rock Lighthouse has a tumultuous past, and was shut down due to its expensive upkeep in 1957.

Tillamook Rock Light is over a mile off Tillamook Head (1.9KM to be exact, for you metric folk). That doesn’t bode well for your social life, or another vague concept called ‘human interaction’.

The only way to get their was by boat, and access was often severed in fall and winter, when the local waters lived up to their rather foreboding moniker ‘Graveyard of the Pacific‘.

The Tillamook Rock Light is haunted, lore tells us. At least two ghosts live here; the first is a friendly lighthouse keeper who was firmly attached to the rock and was buried here. The second ghost? He’s more disagreeable – the story is that he too liked the lighthouse, and threatened to kill anyone who took his job.

The keeper, having apparently not read the 7 Habits of Highly Effective People, chased his eventual replacement up the stairs, where the new guy – terrified – pushed the former keeper down the lighthouse.

Mr. Grumpy Pants survived the fall, but was taken away in a strait jacket, and his said to howl in disapproval when folks climb those very stairs.

Even today, locals talk of a glowing light from the Tillamook Rock Light, despite that it was officially closed down in 1957.

The lighthouse took an eerie turn in 1980. That’s when a groups of realtors bought the deserted lighthouse and formed the Eternity at Sea Columbarium, where the newly departed could live out there ‘foreverness’.

But the Pacific is an angry beast, and damage to the lighthouse – combined with ‘spotty record keeping’, according to the Oregon Mortuary and Cemetery Board – led to end of operations in 1999.

A reapplication to continue the columbarium was revoked in 2005, although Eternity By the Sea’s website was taking applications in 2007.

As of 2017, the only way to visit Tillamook Rock Light is by helicopter. Several local companies do ‘fly over’ tours, including Seaside Helicopters in the town of Tillamook.

Incidentally, the Tillamook Rock Light actually has a Point Break connection. No, not that one – long before the GoPro generation, someone made a film that was actually pretty good, called Point Break, in the heady days of 1991.

Long before The Ozaki 8, there was a plot device called ‘The 50 Year Storm’, in which Bodhi predicts he’d die surfing a once-every-50-years-swell at Bells Beach, Australia.

Bodhi really did meet his end at Bells Beach like he predicted, after a good fight with Johnny Utah (Keanu Reeves – not Luke Bracey!). But they didn’t film the Point Break (1991) Bells Beach scene at Bells Beach – they filmed it at Indian Arm Beach in Oregon’s Ecola State Park.

Watch this if you’re a Point Break fan – or you watched the remake and committed the ungodly sin of not seeing the original.

Pause it at 0:03. It’s a cloudy day, so you can’t see it, but if you veered a little more to the right, you’d see Tillamook Rock Light right there keeping guard as it has for over a century.