It’s not Banff Springs Hotel room 873, but the Fort Garry Hotel in Winnipeg has a mystery of its own.

Ask anyone familiar with haunted hotels in Canada and it frequently pops up. Indeed, the strange goings on at Fort Garry Hotel room 202 is the stuff of creepy Canada and would make even Stephen King take a second look; think blood trickling down walls and a ghostly woman who asks for water and then vanishes.

Like you’d expect, her story is not a happy one – if it happened. Yet some very high profile guests attest that something’s not right in Fort Garry Hotel room 202, including former Ontario Liberal MP Brenda Chamberlain, who inadvertently shared a bed with the lonely spirit in 2004.

Rumours tell us the ghost of Fort Garry Hotel is a former guest. Years ago, on hearing of her husband’s death in a car accident, she hung herself in the closet. 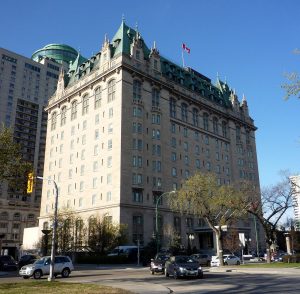 Fort Garry Hotel may have a guest that never checked out. Photo Source: By Bobak Ha’Eri – Own work, CC BY 3.0, https://commons.wikimedia.org/w/index.php?curid=6875266

Some variations of the story say she might have been murdered, but that’s hearsay.

That’s all we know about her; we don’t have a name, age or anything to verify when she was here. But evidence from the other side suggests she never left this Canadian grand railway hotel. Reports tell of guests who claim lights flicker and seeping blood on the walls, along with a cloaked woman who appears at the foot of the bed.

The ghost of Fort Garry Hotel is unique in that she’s not tied to Room 202. While that appears to be the centre of the strange occurrences here, she’s been seen in other places throughout the hotel, like the lobby, where she’s been seen crying in a corner, and throughout most of the rooms on the second floor.

She’s also unique in that she’s what one paranormal investigator called ‘a solid apparition’ – something that appears human, rather than a transparent ‘ghostly’ spirit you’ve seen in the movies.

In other words, she’d look like a human – albeit a sad one, and not quite all there.

My stance on all this? I believe at least some of it. I’m not especially into the heebie jeebies, but I’ve had a few strange encounters with the not-yet-departed, like a moment at the Ottawa HI Jail Hostel I’ll never quite fathom.

The Fort Garry Hotel remains an enigma – and makes an interesting stop among the sometimes sad but always fascinating history of Canada’s haunted hotels.