Try as I may to convince folks they’ve got a better shot of seeing the Vancouver Canucks hoist the Stanley Cup than see a great white shark in British Columbia (both more ambitious than realistic, coming from a Canucks fan!), it seems many people can’t get enough JAWS in BC.

Chalk it up to Shark Week or the fact that a great white shark kind of came close to Vancouver Island when it was tracked off Washington State in February, people love great white sharks, and dog gone it, they just won’t stop believing until they see one in the flesh.

A Great White Shark in The Queen Charlottes

We’ve got to go back a little way, but it’s happened before. Back in 1977, this great white shark washed ashore at Graham Island in the Queen Charlottes – now the Haida Gwaii. 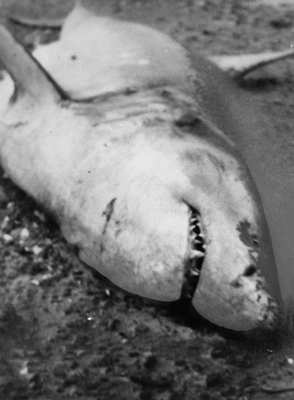 Cue the black and white picture, which makes it look more like it happened back in the 40s than after the advent of colour photography. I don’t know much about this shark either other than it was in December of that year. No info about weather patterns or ifthe shark was one of several spotted that year.

I know only as much as you do. That amounts to a dead great white shark in 1977 on the Queen Charlottes, though in my research I found a comment left by (presumably) a marine biologist, who said this shark was one of ‘only’ three he’d seen in the area at that point.

Given that researchers found a hot spot for blue sharks in the same region a few years ago, it’s not impossible  that great whites frequent the area too. There are plenty of seals in the Queen Charlottes, but that brings orcas. And a great white shark will not come out the winner in that situation.

So your answer, if you’re really curious about great white sharks in British Columbia, is that yes, they’ve been seen here before. They’re rare travellers around here, but stranger things have happened in the frigid waters of BC.