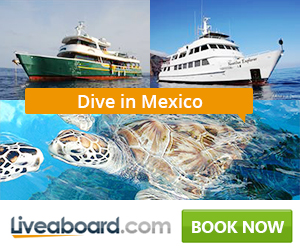 Affiliate Disclosure: This blog post has affiliate links to liveaboard diving tours that will put you in front of great white sharks. If you book a tour, I will receive a commission at no additional cost to you. Opinions are my own, and based on my experiences diving at Isla De Guadalupe with the most awesome freakin’ animals on the planet.

I was at Pipeline in Hawaii a few years ago, and the beach had been shut down because of the crazy swells coming in. Some of them were up to 40 feet high, and a local told me that to surf that spot, you had to be either suicidal or one of the top ten pro surfers on the planet, otherwise you’d get shredded and have your a#$ handed to you by the unforgiving Pacific.

So it kinda puts things in perspective when news broke this week that American pro big wave rider Garrett McNamara reportedly surfed a 100 footer off Navare, Portugal, where on November 11, 2011 he previously set the record for biggest wave ever surfed. At the time folks were saying that one hit the 100 foot mark. Turns out it was ‘just’ 77.8 feet. And this one? Watch the video and judge for yourself.

Hundred footer or not, pretty crazy sh*#. I one tried to surf an eight footer at Tofino (and the Pacific handed my ass to me in a prompt manner), and I can’t even imagine the rush of big wave surfing, but the name sake of this blog, Bodhi (Patrick’s looking down on us with a nod of approval) once said it’s the ultimate rush. And that, dear reader, is what life’s all about.