On a crisp morning in March of 2015, Norwegian snowboarder Stian Aadland invented the sport of eclipse snowboarding.

The requirements for this pastime are decidedly simple. In your eclipse snowboarding tool kit: a snowboard, some snow, a slope and, an eclipse perhaps?

Simple, yes – but not easy. It’s pretty hard to time an eclipse so you’re there with GoPro the moment it happens – and even more so a total solar eclipse, which occur much less frequently than a partial eclipse.

In a total solar eclipse, the moon passes between the Earth and sun, and blocks out the latter’s light. This upcoming eclipse on August 21 is exactly that, and they’re only visible in certain places.

It was Norway’s turn in 2015 when 29 year-old Aadland had a nifty idea. I really don’t how this popped in his head, but suffice to say that eclipse snowboarding has a limited membership.

Eclipse Snowboarding On a Norwegian Glacier

The video you’re about to watch shows Aadland with his split board on a glacier in Svalbard – a Norwegian peninsula that juts into the Arctic Circle.

It’s a chilly morning at that. 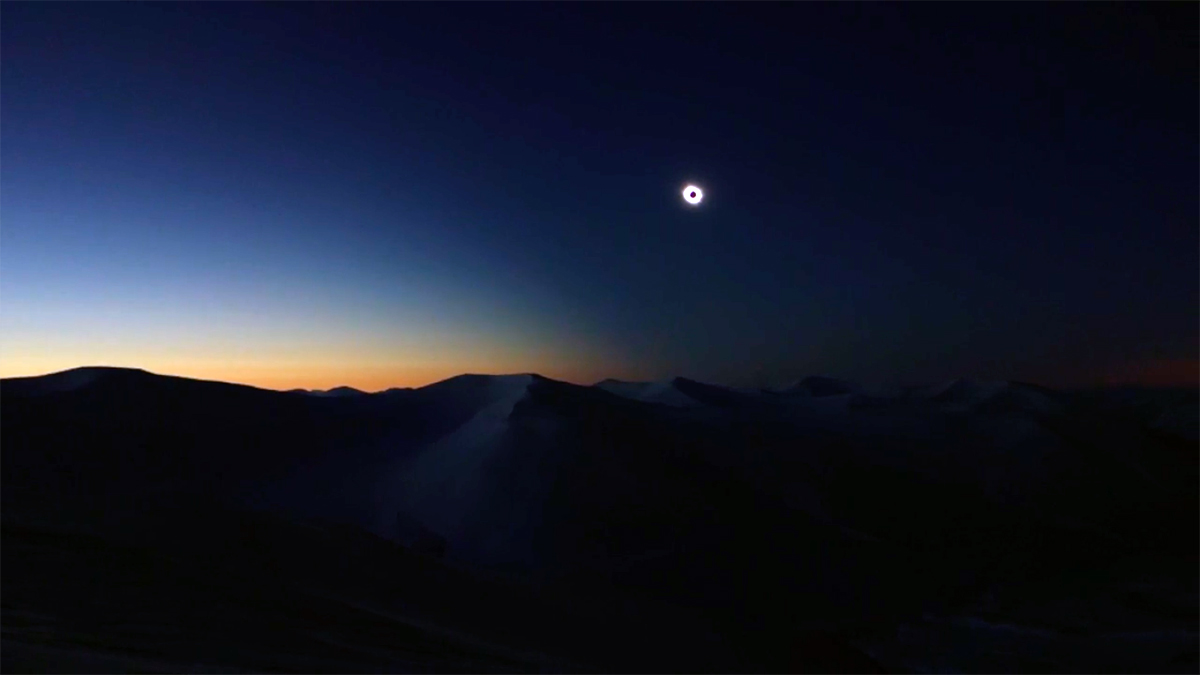 You have to be some where remote to see the moon cast a shadow during a total solar eclipse – like glacier in Norway on a snowboard! Photo Source: Vimeo.com

Aadland works as a tour guide and was supposed to be working that day. But hey, a total solar eclipse only occurs in your area every few decades, right? He used that as an excuse to steal away from the job for a few hours to the remote location.

You need to be in a spot where the moon casts a shadow to fully appreciate a total solar eclipse. A glacier in the Arctic Circle evidently qualifies as one, and indeed, it’s a trippy moment at 1:26 in to the video when day turns to night. And for a brief moment, Stian Aadland is the only person in existence – something he reckons he’ll remember “’til I’m a million years old!”.

Snowboarding in an eclipse is pretty special.

By the way, this week’s solar eclipse is only visible from a few places in the United States and Canada. You may be keen to follow our Norwegian friend and try eclipse snowboarding yourself. Good luck – it’s a little hot for snowboarding at the moment, although Transworld SNOWboarding reckons you could do it at Mt Jefferson in Oregon and the Tetons, near Jackson Hole, Wyoming.