Diver Josh Eccles Helps Shark That Asks For It

Here’s a story about a shark and a diver that would make Rob Stewart proud.

It’s a story that could’ve ended badly for a lemon shark off Jupiter, Florida, that approached diver Josh Eccles in an unusual manner.

As Eccles told WPTV, the shark nudged and bumped him to signal something was wrong. Eccles then reached out to the shark, which lifted its belly, and the diver saw the problem:

A large hook, almost the size of your hand, was stuck in its underside. Fellow diver Chris Maddeford of Emerald Charters filmed what happened next.

As you’ll see in the video, Eccles tried twice to remove the hook. The first time he was unsuccessful, but the second time worked. He successfully yanked the hook out of the shark, which promptly swam away – and then quickly returned to nudge Eccles several times. 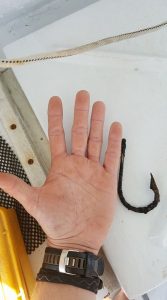 The hook pulled from the shark’s belly. Photo Source: Facebook.com

The shark even appears to nuzzle the camera when relieved of its burden, in a show of appreciation that reminds me of a similar display made by a humpback whale stuck in a fisherman’s net off California in July 2011.

That had a happy ending, and while there’s no way to verify, Eccles thinks this shark will heal up and move on.

Not the First Time

This isn’t the first video we’ve seen of a diver helping an ailing shark. Just three weeks ago, diver instructor Brett Johnson pulled a knife stuck in a nurse shark’s head off the Cayman Islands.

It kind of makes you scratch your head and wonder what some people are thinking.

Eccles himself says he’s removed hooks from marine life on more than one occasion, though this is the first time plucking one out of a shark.

His Facebook bio says he once worked as a shark feeder in the Bahamas. He’s certainly no stranger to sharks, and fills the role of a shark helper quite aptly.