The Death and Rebirth of Ian Flanders

It always stings when someone dies young.

We can dress it up and say it’s not tragic when they go out doing the thing they love. But the loss remains. It’s real. It hurts, and I think BASE jumper Matt Blank has felt that for a while.

Blank’s jump partner and best friend, Ian Flanders, died last year on a ‘simple’ BASE jump in Turkey. And like that, a it ended, not 30 years into this precious thing we call life. Yet a year later, we’re invited into the lives of Blank and Ian Flanders – both in the air, jumping off stuff, and the camaraderie of the two as their unspoken bond grows stronger.

We see the aftermath too, and combined, it’s 12 captivating minutes that will make you laugh, cry – and then cry even more.

The Death of Ian Flanders

Ian Flanders was an American BASE jumper. He was 28 years old and a noted superstar in the BASE jumping community. He was the consummate professional, according to Blank who put safety first and had done dozens of BASE jumps and wingsuit flights – including several through the notorious ‘crack’ ravine at Wallenstadt in Switzerland, which featured so prominently in the Point Break remake.

You’re also going to see Ian Flanders and Blank jump from Perrine Bridge in Idaho, if I recognize it correctly, along with video and good times of the two on their adventures. 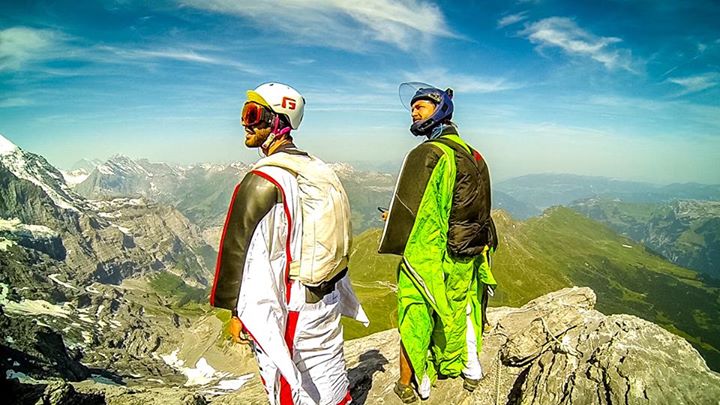 Ian Flanders before a wingsuit flight.

His death is somewhat ironic in that he died on what the two would consider a routine BASE jump off a 900 foot cable car in Turkey (rather than a wingsuit flight, which is even riskier, and which is how Dean Potter died) barely two months earlier.

Then Blank was alone, suddenly, without his best friend. And the world was emptier.

But not for long…

A Soul is Reborn

The video you’re about to watch is called ‘When We Were Knights’. It’s a 12 minute film shot by Blank and Ian Flanders before, during, and after Flanders’ death.

There’s an ingenious narrative device that I won’t reveal – you need to watch the entire video for maximum impact – that frames the story and is juxtaposed over absolutely stunning wingsuit footage, BASE jumps, and general aerial bad-assadry that solidifies why Ian Flanders was one of the biggest figures in the BASE jumping community.

You need to watch the full video to feel this. Believe me, you won’t have trouble doing that. Watch it on a desktop computer rather than a phone for this to hit home, preferably somewhere quiet, with no distractions.

Watch this from start to finish and let the tears flow.

Few people are lucky in life enough to dance so precariously and as Potter said, ‘put it all out there for the most beautiful expression’. The end came too early for Ian Flanders, but his soul lives on, in this video, and those left to remember his life.

For 12 all-too-short minutes, you’ll know what that means.