Watch Cody Townsend Own the Most Insane Ski Line in History

The essence of extreme sports is to find and ride the perfect line. American skier Cody Townsend seems to have taken that a little too literally in this Red Bull video filmed three years ago in Alaska’s Tordrillas Mountain range.

We’ve seen some pretty intense things on this website over the years (and yes, I’m probably guilty of using ‘most extreme ever!’ a few times too often). Well let me bring my case to you now with a simple question:

Watch this video. Have you ever seen a more perfect line – and just as notable – someone defy physics quite like this?

There is no physical way in this universe a human being could or should squeeze through an opening like that. It’s crazy enough it exists in the first place. It’s even nuttier anyone would try to get through it.

Like, dude, how the F**k did Cody Townsend squeeze through that opening and NOT end up as road pizza? 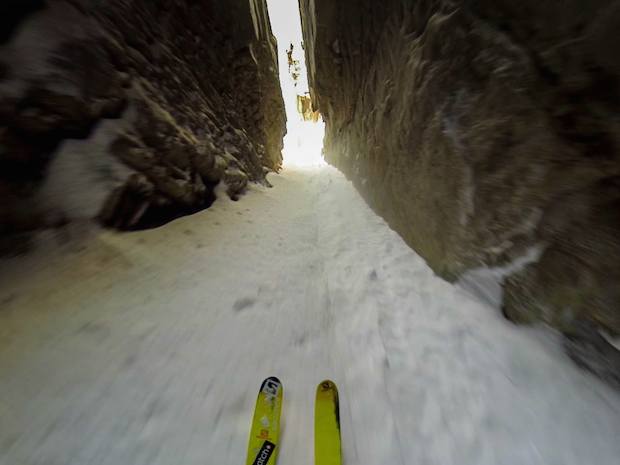 How the hell did he make it through this crack? Photo Source: Facebook.com

It is November 3 at the time of this writing. It’s a chilly one at that here on the west coast of Canada. Cue the cheeseheads and powder hounds among us – that means it’s the start of ski season in the Northern Hemisphere.

If I may be so bold, I can think of three ways to open your mind to this iciest of seasons:

First, watch this hilarious video of French skier Candide Thovex have ‘One of Those Days’ up on the slopes. With over 6 million views on YouTube, it won’t fail to bring a smile to your face.

Second, take a moment and ride with Owen Leeper as he lives up to his name at Jackson Hole in November 2016. Watch and enjoy as he kills an 85-foot drop at one of the most notorious ski lines on the planet, Corbet’s Couloir.

Finally, pull up a chair and really have some fun. Take a moment to watch this absolutely ridiculous ravine in the Alaskan mountains, and Cody Townsend – the dude that owns it.

Ain’t no man, woman or creature got no business making it through that in one piece. For real brother, he got some cojones big enough for a dump truck.