It’s up there with time machines and hover boards (that actually hover). Yes, the wait is over – after years of nifty videos from folks like Yves Rossy (the Jet man of Rio De Janeiro), you too can join the likes of men and women who fly of their own propulsion. You can, indeed, buy a jetpack as of this year, according to folks in the know.

But it will probably cost more than your condo.

Yes, it’s really that simple. I never thought I’d see the day, but if you follow this link you can buy a jetpack and go full-on George Jetson. Seriously, it’s that simple. Go to Martin Aircraft Company’s website and you pick the colour, decal, and pretty much customize to your liking.

Have Jetpack, Will Travel

So what’s all the fuss about a jetpack and how does it work? You could probably say the interest began in 2011 when Swiss inventor Yves Rossy took the first ever jetpack flight across Rio De Janeiro. That appears to have encouraged several companies to invent the lucrative niche of jetpack flying for jet-setters with the estimated $100,000-$250,000 it’ll cost to plop one down in the garage by their favorite weed-wacker.

Presently, Martin Aircraft company, based in Australia, is furthest along the jetpack race, and announced (in 2015) they’d be available this year. 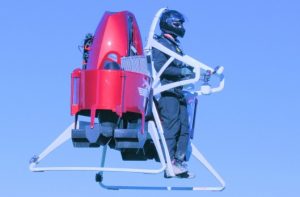 Another company, JetPack Aviation – also Australian (what is it about Australians and their jetpacks?) – says theirs will be the only ‘true’ jetpack and available in the near future. Company owner David Mayman got some attention in November last year when he took a jetpack joyride around the Statue of Liberty.

Conveniently, the Martin jet pack runs on the same fuel used by your lawn mower, has a top speed of 74km/hr and tops out at 3,000 feet.

If you run out of fuel, hey, no worries guy. A ballistic balloon will come to your rescue.

A Different Kind of Wingsuit

Of course, the grass is always greener in some other pasture. In this case, it’s the Jetman of Dubai – Yves Rossy and his jet-guy partner Vince Reffet, who kind of one-upped everyone with jetpacks Rossy built himself (I think sponsored by Skydive Dubai?) seen in a delightful video released last year, called Young Feathers (see below), in which the partners in crime simply tear it up in the air above Dubai.

They’re faster, louder and more manoeuvrable than jet products available to peasants like you and me. And hot dang, wouldn’t you know it, Rossy and Reffet filmed a totally spiffy video in November 2015 – the same month Mayman flew around the Statue of Liberty – in which they flew next to an Airbus A380.

The only way you’re getting this F-22 Raptor-ish flying death machine is if you pry one directly from the hands of the man who built them. Rumour has it though that Skydive Dubai will offer jetpack flights if the demand is there, which, just as a bear goes poo in the woods, people will line up to get high and go ballistic. I mean just look at that video!