**Editor’s Note** May 2019, Sadly, it is far too dangerous to visit Angel Falls and/or Venezuela at the moment. Please shuffle this beautiful spot off to the ‘One Day’ section on your Bucket List. Don’t Travel to Venezuela until your government says it’s OK to do so.**

Bodhi did well when he chose Angel Falls as his place to complete the Ozaki 8. Angel Falls is the tallest waterfall in the world, at 979 meters (3,212 feet) and in the middle of a formidable jungle in Venezuela. It’s the perfect spot to commit The Act of Ultimate Trust – the eighth and final ordeal of the Ozaki 8.

I can’t divulge much more than that if you haven’t seen the movie other than you really, really don’t want to follow Bodhi’s lead if you ever visit Angel Falls. You’re much better seeing the stunning waterfall from a distance, or flying over it if you’re lucky (or independently wealthy!).

Yet Angel Falls has inspired explorers, navigators and searchers long before some movie called Point Break made it popular in 2015. Today it’s one of Venezuela’s most popular attractions – and rightly so when you view it in person.

The tallest and arguably the most stunning, Angel Falls Venezuela is the tallest waterfall in the world. The falls drop over the edge of the Auyantepui mountain in Cainama National Park, in the Gran Sabana region of Bolivar State.

Put another way, it’s right in the middle of the Venezuelan jungle, far removed from anything that might pass for civilization.

They’re named after an American navigator, Jimmie Angel, the first pilot to fly over the falls, in 1937, and who returned to attempt a landing on the falls’ summit, Auyan-Tepui, but the wheels were damaged in the marshy terrain at the top. He and his three companions, including his wife Marie, had to hike for 11 days to get back to ‘civilization’ on the mountain’s gently sloping backside. 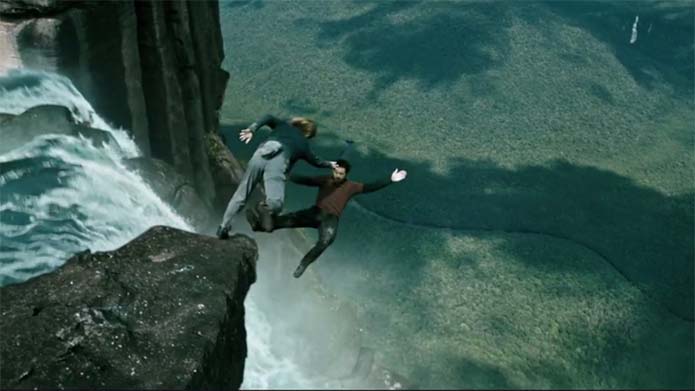 The plane remained at the top of Angel Falls for 23 years, until it was airlifted by helicopter in 1960. You can see the plane today in front of the airport at Ciudad Bolivar – one of the two airports in the region you’ll have to transfer through if you fly to Angel Falls from Caracas.

How to Get to Angel Falls

Angel Falls is stunning. I’d put it near the top of destinations you should visit during your life. Yes, you really can (and do) see Angel Falls for the first time as you journey up a river by boat (the Churun River if you’re curious). It’s not an easy place to visit and will take at least 4 days of your itinerary beyond Caracas.

Then again, Angel Falls is arguably the single most common reason travellers visit Venezuela – and the sight of the Falls after your journey to get there will be a memory you’ll cherish for the rest of your life.

You’ll need to take a tour to see Angel Falls, and two flights if you’re leaving from Caracas (Caracas to Puerto Ordaz or Ciudad Bolivar – Look for Angel’s plane! – and then to Canaima air strip). You’ll stay at a small lodge in Cainama National Park, and likely sleep in a hammock at least one of the nights.

Just book the tour – they’ll assist you with the details. Note these are affiliate links and I’ll receive a commission at no additional cost to you if you book a tour.

But be sure you do. Angel Falls is spectacular, and much less touristed than Machu Piccu in neighbouring Peru. You could do both, of course, but Angel Falls is magic. Go out of your way and endure hardship to see this magical place, and you’ll see why it fits so well in the Ozaki 8.