7 Questions for the New Bodhi

OK Warner Bros. You got me.

Despite ongoing pleas from Point Break purists, amused observers and even original cast members, the new Point Break is gonna happen. That’s it, done. It’s wrapped up in paper and dressed with a bow. Why make a new masterpiece when you can pretty up an old one?

With all that said, Warner Bros is not getting off quite so easy. Point Break is remade. Fine – but the key here is going to be Bodhi. Because he’s either going to sort of save this obvious attempt to cash in on the GoPro era or send it flailing like a kook in a 50 Year Storm.

The only true Bodhi is Patrick Swayze. But we don’t have any choice in the matter here. So Warner Bros is going to be accountable for this central character to a Board of Directors – me – and I like to think Patrick Swayze as well. We’re watching you Edgar Ramirez, with these 7 questions for the man who would play Bodhi…

A quote from Roger Ebert’s 1991 review of the original Point Break, “These aren’t men of action, but men of thought, who choose action as a way to express there beliefs.” Early shots of the new Bodhi show a dude with lots of tattoos. Come on guys, he’s a poet not a goon!

Swayze’s Bodhi robbed banks to make a statement about the human spirit. He’s got a storm in his heart and couldn’t care less about some PR stunt, which, from what I can see, is a pretty stark contrast to the new film’s ‘I’m a Robin Hood for the 21st century’ approach. 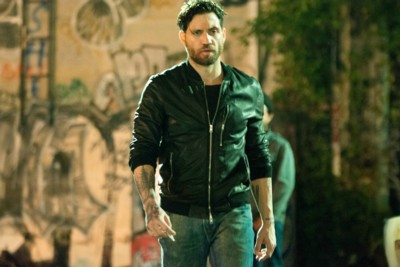 It seems pretty obvious that Bodhi needs to surf. While the new movie goes far beyond the ocean and teases us with nice wing-suit shots along with snowboarding and even a little motocross, the actor who plays Bodhi needs to at least stand up on a surfboard.

Patrick Swayze actually did many of his own stunts in the original, including the film’s climactic skydiving shot. Now let’s see just how committed Edgar Ramirez is to his role.

Bodhi is a mystical guru. He’s beyond charismatic – he leads a tight unit in, let’s just say, adverse conditions. So now we wait and see. Does the new Bodhi both inspire men and cheese them off enough to jump out of a plane with no parachute?

Bodhi talks to the ocean. There’s an important scene in the original where he teaches Utah (Keanu for those of you who haven’t seen it!) to surf at night simply by going with the waves’ energy. Bodhi is connected to the ocean and the Earth is his cathedral. This role goes way beyond extreme sports. No pressure, Edgar, but went want some chanting…

Arguably the most pivotal scene in the first movie talks about big-wave riding and how it’s ‘the ultimate rush’. You can take that both literally and figuratively. We expect Bodhi to take us for a ride – and only he tells us when it’s over. But now, will he put the movie on auto-pilot and just re-do what’s been done, or is there a chance he’ll take the plot in some ingenious new turn?

#7 Will He Touch the Divine?

I’d say this is the single most important factor for the new movie. Point Break worked because of a beautiful dance of fate and the universe,  both woven together brilliantly throughout the film, which led to an unforgettable finale on a lonely beach in Australia. We want something big here Edgar. Swayze’s Bodhi truly reached out and touched destiny. Show us something Edgar. Are you gonna reach out and touch the face of God?

With that off my chest, check out the trailer and decide for yourself. Will the new Point Break be something magical or nothing but a well-shot GoPro video with motocross and wing-suits as Hollywood scratches its head to think of something new? My thinking is the latter, but I guess we’ll see. Watch out for a few cameos too. Does the FBI head look familiar? Hint – it’s Roach! At least he’s back, and so is Nathaniel.