There is no shortage of haunted hotels in Arizona.

Does that surprise you? It shouldn’t – the southern United States is rich is folklore that doesn’t always well on the receiver’s end. Case in point, the many haunted hotels in San Antonio which owe much of their ghoulish history to the blazin’ Alamo Days.

It turns out the haunted hotels in Arizona have a similar theme of early 19th century crimes and border skirmishes that, well, replay their history in more ways than you’d think.

For proof of that, head to Jerome, Brisbee and Prescott, Arizona – the respective epicentres of haunted hotels in Arizona, where you’ll find many an inn with guests that never really checked out.

One of the most famous haunted hotels in the United States, the Jerome Grand Hotel started its life as a hospital/asylum in the 1920s. Cue the heebie jeebies and things that go bump in the night. There are many of those at the Jerome Grand Hotel, including its most famous ghost, Claude Harvey, whose demise might convince you never to take a hotel maintenance job. Trust me on that one.

What Happened: Claude Harvey was mysteriously crushed by a slow moving elevator in 1935. Today, said elevator gives off strange lights and sounds. That’s probably why you’re likely to see good Claude taking the stairs or in the basement. He really doesn’t like that elevator. Heck, can’t say I blame him.

What You Might See: Weird things in the elevator. Seems Claude is still working behind the scenes – although you won’t see him inside it. Also, you might see a small boy and an old lady dressed in white. Happy folks, happy times. The Jerome Grand earns its title as one of the most haunted hotels in Arizona many times over. 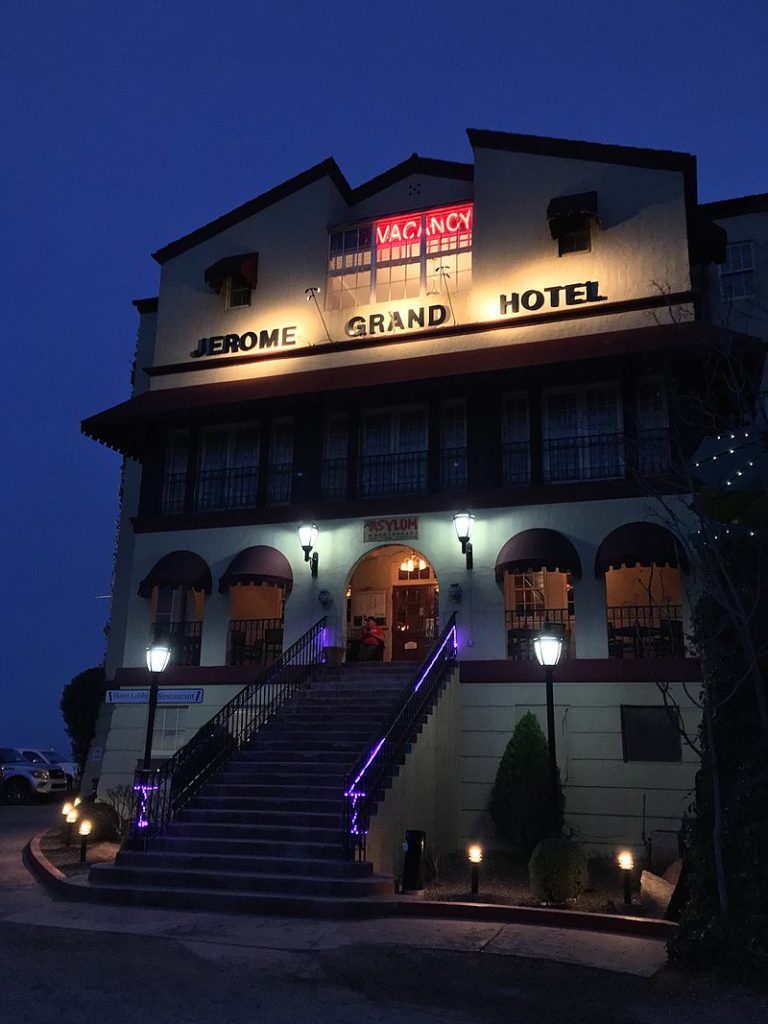 Jerome Grand Hotel is one of the most famous haunted hotels in Arizona thanks to a ghost named Claude who met a mysterious demise with an elevator in 1935. Photo Credit: Alan Levine, Wikimedia Commons

It’s generally not a good sign to check into a hotel called Ghost City Inn if you have an aversion to things otherworldly. Then again, if you’re into the paranormal stuff, Ghost City Inn (also in Jerome) might really float your boat. Any building built in 1890 that’s housed a boarding house, funeral home, religious retreat and art gallery is bound to have stories. Ghost City Inn has its share of those.

What Happened: Dead people were housed here (read that thing about the funeral home again). The Inn itself is named after Jerome’s nickname: Ghost City. There are reasons for that you probably don’t want to know.

What You Might See: You may hear a lot of door slamming at the Ghost City Inn. One culprit? A female spirit in the Cleopatra Hill room. Not sure I’d want to work the night shift there.

Some people take their job way too seriously. Hotel Monte Vista is one of them – some of its staff never leave work. Of course, they may not be, well, alive, but who cares? Hotel Monte Vista is a veritable hotspot for ghosts, to the point that John Wayne (yup, the tough guy actor your grandfather watched) once saw a ghost in this storied hotel.

What Happened: How much time do you have? Two prostitutes died here in the 1940s. A bank robber held up a nearby bank before being shot and enjoying a last drink in the hotel’s bar in 1970. There’s a baby, a dancing couple, an elevator attendant and a bellboy who loved his job so much, he may knock on your door to take your order. Head to Room 210 for that. Bonus points: The Duke once stayed there.

What You Might See: A whole lot of ghosts, although the bellboy and elevator attendant seem to be the most amiable. Honestly, just head to the Hotel Monte Vista, check in and ask housekeeping about their stories with the otherworldly. To Hotel Monte Vista’s credit, they appear to fully embrace its ghostly reputation. 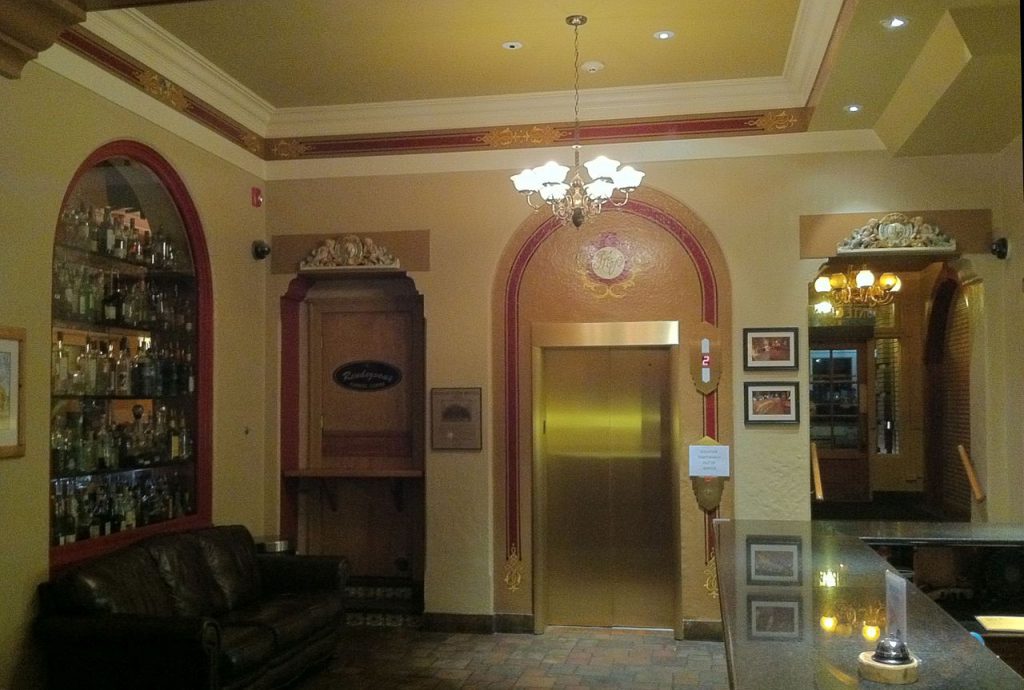 A ghostly (and friendly) elevator attendant may greet you in the lobby of the Hotel Monte Vista in Flagstaff, Arizona. Photo Credit: JMBates020. Wikipedia.com

Put the word ‘Grand’ in any hotel in Jerome or Brisbee and you know it’s gonna end up one of the most haunted hotels in Arizona. The Bisbee Grand Hotel earns its spot on that rather ghoulish list.

What Happened: Old wooden hotel circa 1906 stuff. Saloons, a fire, and the general shenanigans that went on a hundred years ago in the American Southwest.

What You Might See: Head up to the northwest hallway and you might see a mist or feel that creepy feeling you’re being watched. The most logical culprit is a ghost lady dressed in Victorian garb who might carry a tea tray between Rooms 2 and 3. Relax – she’s not so bad. In fact, she’s even been known to tuck tired guests into bed at night!

Yeah, that sounds just a little formidable. Copper Queen has long been known as one of the most haunted hotels in Arizona. Built in 1902, it’s had plenty  of time to live the kind of colourful history that makes folks wanna linger after, well, departing this life. Heads up, if you’re a single dude, you’ll love Room 315. Even the kids will have a phantom companion here.

What Happened: About that thing in Room 315…it’s called the ‘Julia Lowell Room’ because a prostitute named Julia Lowell (natch) favored this spot to ply her craft in the early 1900s. The story goes she fell hard for one of her clients, who rejected her. She took her life in the room’s bathtub, but modern encounters with her are more light-hearted. Sadly, there is also the ghost of little boy at the Copper Queen Hotel, who drowned in the nearby San Pedro River while his mother worked at the hotel.

What You Might See: If you’re a guy in Room 315, be prepared to see Julia Lowell. Not to worry though, she’s friendly (maybe a little too friendly). You may also see (and smell) a cigar-smoking man or a former female employee who helps out during busy times at the front entrance. Your kids might also see a little boy who loves to play with other children.

The ghostly bride known as ‘Faith’ is believed to have hung herself in this belltower at the Hassayampa Inn in Prescott, Arizona. Photo Credit: Jamie Kroll, Wikipedia.com

The name is awesome. The history not so much. Well, not for Faith – a jilted bride who checked into the Hassayampa in back in 1927 on her honeymoon. Want to see a ghost in 2019? Head to the fourth floor of the Hassayampa Inn.

What Happened: The story goes that Faith’s new groom stepped out for some cigarettes. Turns out he never came back. Faith never quite got over that, and hanged herself in the hotel’s belltower. But that’s not the end of Faith’s story at the Hassayampa Inn…

What You Might See: You might see Faith on the fourth floor – particularly in Room 426. You might smell her too; the scent of lilacs signifies Faith’s spirit is close by. She might also show her presence if you rearrange things in this room that meant so much to her. Don’t do that or Faith will get pissed. Speaking of which, fancy a brandy by the fireplace in the lobby? You might encounter a guest who looks preoccupied. That’s rumoured to be Faith’s groom, perhaps having second thoughts about his part in making the Hassayampa Inn one of the most haunted hotels in Arizona.