OK, so this is my second cheesehead moment in the past month (cheesehead moment being parlance for ‘I want to look at something stupid for the next 7 days while shut in my condo eating dorritos’). But watching this video just now, of dogs surfing in a mobile surf pool in California, I got the hankering to indulge in the dangerously addictive and slightly disturbing new addiction of looking at videos of dogs that like to surf.

It’s highly addictive, believe me, and probably more that a little sad. And yet the apple fell from the tree and did even further brain damage when it cracked my noggin just now, because the more I watched, the more I came to a crazy epiphany:

1) They Have Four Legs

This may be obvious, but it’s easy to overlook. Speaking from experience, it’s exceedingly difficult to actually stand up on a surfboard – at least when you’re starting out. Dogs have an advantage here, with more stability thanks to those 4 legs spread out over a board, making them less likely to bail.

2) They Have Lower Centre of Gravity

Most MMA experts will tell you that shorter fighters actually have an advantage over their taller opponents in that they’re harder to knock down. Watch these dog surfing videos and you’ll see they instinctively crouch down as the waves take them to shore. A funny thing happens in the process – they tend to stay on longer than their taller, two-legged owners.

While practice makes perfect, you’ll see in these videos that our surfing pooches rarely flounder in the art of surfing. Granted, we’re seeing the ‘best of’ moments here, and not all dogs will learn this so quickly. Still, the English Bulldog is one of the most common dogs we see on a surfboard, and (much love to all Bulldogs) if they’re on the lower end of canine intelligence, you have to imagine how a German Shepherd would do. 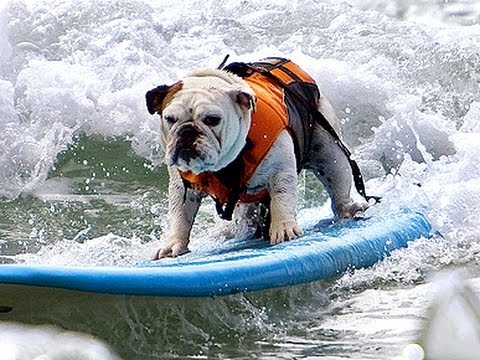 Come on…it’s a DOG on a surfboard! If that doesn’t get you, here’s a picture of a bulldog in a life jacket…

How to Get Your Pooch to Surf

Bear in mind that Fido isn’t going to light up Mavericks quite like Kelly Slater. They still need to paddle out, right? And of course, some dogs will pick this up easier than others. I’ve yet to see an image of a surfing basset hound.

Dogs actually have a long history of surfing with their owners, starting in the 1920s, so if you’re an active surfer, it’s not a huge stretch to take Fido out with you and see how he takes to it. Start shallow – and be sure he has an affinity for water in the first place.

Also, if you’re in California, the Lucy Pet Foundation is a non-profit organization with a mobile wave-maker that helps pooches get the hang of killing it on a surfboard, proceeds from which help the foundation spay and neuter pets throughout the United States.

Your dog may never be so happy – and you’ll help a lot of animals in the process.