Affiliate Disclosure: This blog post has affiliate links to San Antonio Hotels that may be haunted and scare the living s**t out of you at 3AM! If you book a tour, we may receive a commission at no additional cost to you. As usual, we try to keep it real and only recommend accommodation that will truly rock your world and, in this case, put the heebie jeebies in you as you search for hotels of the ghostly variety…

If you’re in the Lone Star state this summer, and your idea of an extreme vacation is of the paranormal variety, you’re going to love these three haunted hotels in San Antonio.

Granted, Halloween is probably not on your mind come the sunny days of April. But seriously – some of this is just creepy to the point you may want to stop reading to assure a decent night’s rest. Texas is surprisingly one of the most haunted locations in the United States, and San Antonio seems to be at the center of it.

That’s in part thanks to a rather bloody event in Americana we still talk about, The Alamo, and a few souls who seem to linger in these 3 really, really haunted hotels in San Antonio – a city rich in ghosts, ghoulies, and a few otherworldly guests that simply don’t want to check out. 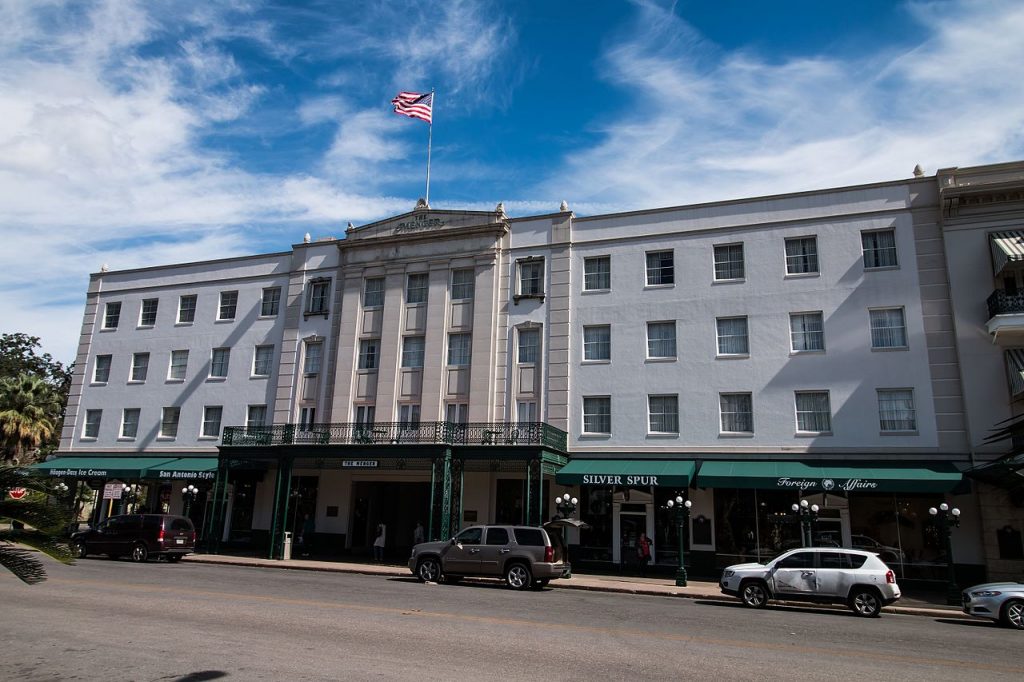 Menger Hotel has been called one of the most haunted hotels in the United States. Photo By Renelibrary – Own work, CC BY-SA 4.0, https://commons.wikimedia.org/w/index.php?curid=52405769

You can’t get any closer to the Alamo that the Menger Hotel. The storied building opened in 1859 literally where the famous Battle took place in 1836 and played a key role housing soldiers during the American Civil War. Pioneers/tough guys Sam Houston and Robert E. Lee are known to have stayed here, along with soldiers, rowdies, and more than a few husband and wives who appear to have lingered.

The Menger Hotel isn’t just haunted. It’s like, really, REALLY f**king haunted (like, really), and is probably the most intense of the many haunted hotels in San Antonio.

The Story: Where to start? The Menger Hotel may be the most haunted hotel in Texas. Over 40 ghosts are reported at the Menger Hotel, including Teddy Roosevelt. One of the more tragic, though, is the story of Sallie White, beloved chambermaid at the hotel in the 1870s and shot by her jealous husband.

She died on the third floor, two days later – her funeral paid by the hotel that loved her so much. You can still see the receipt in the lobby.

You Might See…Sallie White, on the third floor (clutching towels). Teddy Roosevelt and the Rough Riders, a wealthy businessman – Captain Richard King – who died in his favorite suite on the second floor and still lingers there, and in the hallways. And up to 40 other spirits and former Menger guests who, well, don’t want to check out.

Some people call The Menger Hotel the most haunted hotel in the United States. Given its prominent location by the Alamo and the role it’s played in Texas’s vibrant (sometimes bloody) history, it’s not hard to see why.

Learn More At: The Menger Hotel is on the San Antonio Riverwalk. Frankly, it’s a must-do for ANYONE visiting San Antonio – whether you’re into ghosts or otherwise. You can book it here.

The Emily Morgan one of the most haunted hotels in San Antonio. Actually, it’s more than  that – USA Today once called the Emily Morgan the third most haunted hotel on the planet that make Banff Springs Hotel Room 873 look like a Sunday school picnic. Like The Menger, Emily Morgan has all the heebie jeebies and spiritual remnants of being in Alamo Plaza. Factor in its formal role as a medical center in the roaring 1920s and ’30s and you’ve got rich fodder for some spectral amazement, and spooky tales for the kiddies at night.

The Story: Built in 1924 as a medical arts center, the Emily Morgan Hotel was actually a hospital for 50 years, and after a brief stint as an office building, became a hotel in 1984.

Floors 7, 9, Eleven and Fourteen seem to have much of the ghostly activity, along with the basement, which were the psychiatric ward, surgery level, waiting room and morgue, respectively. 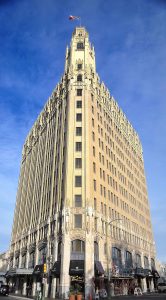 There is no thirteenth floor at the Emily Morgan Hotel, and in a twist that would do Stephen King proud, no Room 1408, either.

You Might See…Each floor has its own unique form of creep. Open a door on the fourteenth and you may see a hospital room which vanishes after a closing and reopening it again. Nurses appear on the Twelfth Floor, along with bathroom doors that open on their own. Glowing orbs and the stench of burning flesh may greet you in the basement, if you had the cojones to head there in the first place.

Actually, you can’t go to the basement at the Emily Morgan Hotel because it’s off limits for guests. Fortunately (or not), you may end up there regardless, if you take the elevators – they have a rather macabre habit of skipping floors and delivering unsuspecting guests to the former morgue whether they want to or not.

Yet the ultimate chills you may experience at the Emily Morgan may come on the seventh floor. It’s here guest report a ghostly bride, who gives an unearthly shriek late at night. Call down to report the disturbance and the front desk might tell you it’s not a guest doing the shrieking – not a live one anyway.

You may also see the ghostly bride of the seventh floor while looking in a mirror, and/or other, more playful spirits, that firmly put The Emily Morgan Hotel in the esteemed ranks of the most haunted hotels in San Antonio.

Learn More At: The Emily Morgan Hotel is in Alamo Plaza and definitely worth a gander while you’re in San Antonio. They’re a Double Tree by Hilton Hotel. Stay There!

The Sheraton Gunter Hotel in downtown San Antonio has a colourful history. Much of that color is red – the Gunter was built in 1909 and at one time served as a headquarters for the US Army and Confederates. More ominously, and less well known, is the Gunter’s place in history as home to one of the bloodiest murders in the city’s history.

That in itself is a story – and good reason to avoid Room 636 at the Sheraton Gunter in San Antonio.

The Story: The Gunter Hotel was built on the site of the former Mahncke Hotel. There’s been a hotel of some kind on this site since 1837. The Gunter was the scene of many a good romp (and more than a few fights) during the 1920s, particularly between two flappers – or prostitutes – who didn’t like each other at the time.

Apparently, they don’t like each other now, either, long after their Earthly demise, and have taken their quarrel to amusing levels of post-wordly bickering on the second floor.

Legendary blues artist Robert Johnson also stayed here, having recorded a session in Room 414 in November of 1936. Johnson died two years later, of mysterious circumstances. In 2009, rocker John Cougar Mellencamp recorded an album at the hotel, and was drawn to room 414 in particular.

Ghostly or otherwise, there’s some kind of spiritual connection here.

More tragically, the Gunter Hotel saw a violent murder in 1965. The background: a blond, good-looking man, checked in as Albert Knox, was seen coming and going into Room 636 in early February of that year, with a woman believed to be a prostitute. Some say it was a drinking binge, and Knox was knocking back the good times and wanted company in the process. 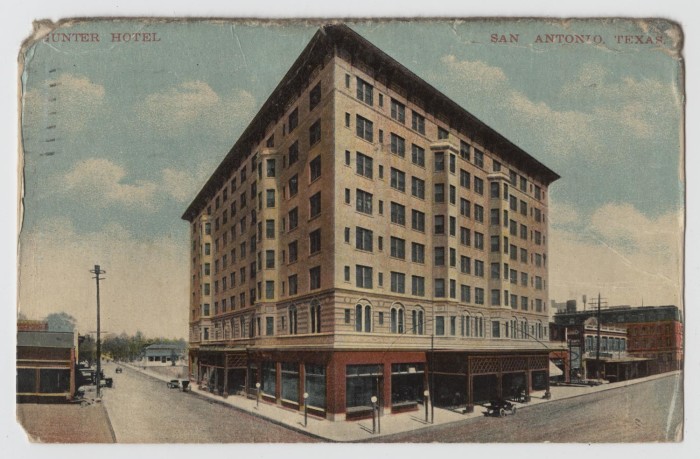 An old postcard of the Sheraton Gunter Hotel.

On February 6, a housekeeper stumbled into Knox’s room, and found the man, startled, with a bloody suitcase in his hands. The room was a mess, covered in blood, prompting a scream from the housekeeper.

Knox ran past her and disappeared. Police tracked a man they believe was Knox to another hotel three days later – now identified as Walter Emerick – in Room 536 at the nearby St. Anthony Hotel just a block away from the Gunter.

Emerick had asked for Room 636, but it was not available, and settled for a fifth floor room instead, where he shot himself before the cops could take him.

A woman’s body was never found. But it’s clear someone died there – cops on the scene later described it as the bloodiest room they’d ever seen, and the bathroom in particular was royally roughed up.

You Might See…A ghostly woman with a soulless expression holding her hands out to you. Three guesses who that might be. Room 636 is now split into two rooms, but a psychic who visited the site was physically attacked by an ‘unseen’ force. Another witnessed the murder in detail.

For a good sleep, you may want to avoid Room 636 at the Sheraton Gunter – truly one of the most haunted hotels in San Antonio.

On a lighter note, and still at the Gunter, our two flappers still seem quite content to stake their territory. The first, called Ingrid, dons a long white dress and is typically seen on the hotel’s upper floors. The second, called Peggy, ambles through other parts of the historic Gunter, and that’s a good thing.

Because Ingrid and Peggy just don’t get along.

You may hear a heated argument at various times throughout the Gunter. They may move furniture too, in guest rooms and communal areas, when no one is looking. Still, it’s harmless fun, and one of the more amusing stories among the many haunted hotels in San Antonio. A little out there? Sure – but that’s half the fun of wandering the storied halls of the Menger, Emily Morgan, and Gunter hotels.

The Lone Star State ain’t right without them, and good reason to take a tour in this colorful corner of the American Southwest.